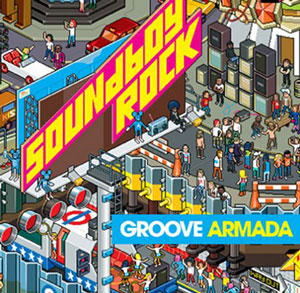 Three years in waiting, the Cambridge based trip hop duo is back. But with electro house already well establishing itself as the genre of the musical season how was the duo going to remind the scene of their presence?

Taking their trademark cool beats and penchant for the ambient chill out but combining this originally with the musical flavour of the month, electro and heavily layered synth bass lines. Soundboy Rock sees Groove Armada capture an array of genres from 70s funkadelia to 80s break dance to today’s interpretation of reggae in one album.

Soundboy Rock opens with GA’s unmistakeably bouncy funky beat and distinctive reggae vocals; Get Down is a great start. Although many of the tracks such as The Things That We Could Share are obviously tinged with electro influences but are still characteristically the making of Groove Armada. Taking the newer sound of break beat as in Save My Soul but also giving a firm nod to older persuasions as per What’s Your Version? makes this album a beautiful mix of the vintage greeting the contemporary.

The duos dedication to chill out has not been swayed as Paris and From the Rooftops show. But the ultra funky Love Sweet Sound and See What You Get are also likely to bring them hits from the dance floor at midnight as well as the beachside at 6am.

Standing tall beside some of dance’s greats such as Daft Punk and Moby have meant that this album fits perfectly with the expectations of GA’s long-standing fan base. But it has been the likes of Song 4 Mutya (Out of Control) that have received rave reviews in regards of this album. I would say that the easily overlooked gems such as Lightsonic, Feel the Same and What’s Your Version? are the reason why this album means that Groove Armada are back on tip-top form.