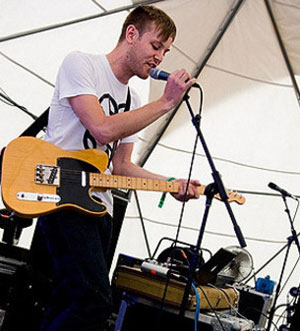 Sportsday Megaphone So Many Colours / So Little Time

Laptop pop. The new prog. I own more than a few synths so I know that stuff like this is ludicrously easy to make. Perhaps only as easy as strapping on a guitar and plugging in a Marshall but nevertheless at first listen it sounds more exciting than it actually is. ‘So may colours…’ is a case in point.

A great deal of what is going on here is for the sheer sake of it. Like an endless guitar solo at the end of a track a lot of noodling is just noodling. There isn’t anything fundamentally more arty about letting your MC505 play out. The constant high tempo bleeping becomes hugely wearing very quickly, as if they’re scared to drop the BPM below 100 in case anyone gets bored. It’s as if they don’t believe in the material enough to slow down. There’s a good deal of Gary Numan going on here, but there isn’t any of his confidence.

‘LA’ is clearly the stand-out track, and that’s the only one where the vocalist sounds interested enough to rise to the challenge. The genre insists on lo-fi even when strictly speaking it isn’t worth it. It gets hugely dull after a few tracks and annoying much after that – the sampled line interference that arrives just before every note makes it very difficult to sit through.

That’s not a fault in itself, I’d challenge someone to listen to ‘Better Living Through Chemistry’ without a break, for example, but this is clearly an album band. On the plus side it’s energetic enough, I’m sure it could kick serious butt in a live setting if they actually deem it necessary to play the instruments themselves. There’s the odd surprising moment and nothing lasts too long. Without vocals this album sounds like early Genesis.

I loved it but if you don’t own copies of ‘Foxtrot’ and ‘Nursery Cryme’ you might want to give the instrumentals a miss. Unfortunately, while it might be unfair to bash something for it’s generic properties, more important than any of the above nitpicking is that having sat through the whole album I’m struggling to remember any of it. Loveboats, marine biologists? Something like that. Lots of bleeping. At least I’m likely to listen to it again, even if I eventually decide it’s rubbish and that’s what music is supposed to be about. Whether it rewards repeated listens is something I’ll just have to get back to you on.