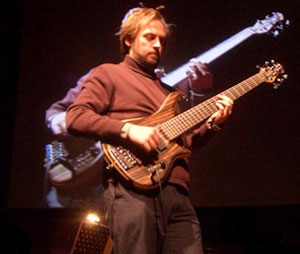 Although not the commercial attraction of Aphex Twin or Daft Punk the influence of Squarepusher’s unique cut-up beats has had an impact at the more illustrious end of the market with Radiohead and Andre 3000, among others, citing his name. Just a Souvenir makes Squarepusher’s (Tom Jenkinson to his friends) eleventh studio album and with it he has delivered some truly uplifting music; to find an album so alive with enthusiasm and invention is particularly nice when it’s from an artist with an already heavy back catalogue.

The inspiration for the album came, according to the artist, from “a daydream about watching a crazy beautiful rock band play an ultra gig. I was left with an urgent sense of responsibility that I do honour to this vision of remarkabe ensemble.” Quite a band he must have invisioned playing a fusion of Electronica, Jazz, Funk and touch of metal and definately a gig I would have liked to have witnessed if only to lose myself in hearing the pulsating Planet Gear performed live.

The sought after feel of a band performing an ‘ultra gig’ is superbly captured as the entire album is enthused with a joyous energy that is immediately infectious, even the albums heavier tracks are playful. Perhaps the oddest and most playful moment is provided early on, track three A Real Woman, one of the few tracks with vocals, sounded to me like The Ramones doing lounge act electronica which admittedly sounds terrifying but it, like the rest of the album, was great to hear.