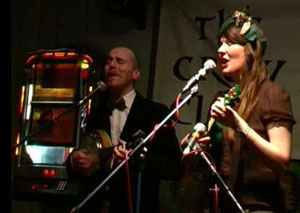 While this album is aimed at fans of folk music in all it’s forms, I would recommend that everyone listen to it as it features a variety of styles and genres and could make you change your mind about what you think folk music is. Following on from Welcome To The People Tree, this album features old and new material and artists, and is very entertaining.

Starting at the beginning, there is Roger Bunn, with some eastern influenced sixties folk with creative percussion and flute. Fuschia are very Sid Barrett while Jade gives us some fiddle driven folk rock. Jake Flowers plays acoustic folk in the tradition of Davy Graham and John Renbourne,Wiyo plays jug band jazz with Django Reinhardt guitar and Admiral’s Hard addresses sea shanties with “All For Me Grog”. I sang along to that one many times in my folk club days, while simultaneously consuming vast amounts of the stuff.

Sam The Balladeer adds the Irish entry beautifully and Katy Carr, who I meet regularly at the 12 Bar, put an excellent modern slant, with the help of poet Jon Hegley, on a tale of Dick Turpin making fine use of keyboards, trombone and, of course, her beautiful voice. Incredible String Band founder member, Clive Palmer, closes the album with some superb frailling banjo to accompany a song about an old maid. This album serves to illustrate the high level of musical talent in this genre and the accessibility of the music these days. Gone are the days when I could not perform in certain clubs because I sang American folk songs. The barriers are down and this album is proof that folk is alive and well, and there are lots of different ways to play it.

Give it a listen, you will love it.