To start with, a rock band needs a decent name and Wasabi Fire Alarm is a quality name for a band. What does a band name say about the sound? Spicy, has a kick, lifesaving, loud? Luckily, you will find a few of those adjectives on “Two Fingers in a V.” 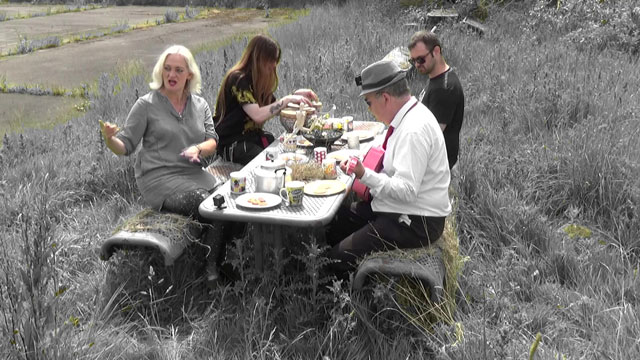 With most newly formed bands, comes ideas, lots and lots of ideas as well as clashes, compromises, differing styles, influences, backgrounds, experiences and goals. This album is a complete combination of all of these with a splash of naughtiness and giving it to the man. With a previous name of Resistance, you can kind of preempt the presentation. Wasabi Fire Alarm, formed in 2018, are fresh, experimental and rebellious.

“Two Fingers in a V” Tracklisting

The album has 10 tracks:

When really getting into an album, that first entry should kick it off right and the title track “Two Fingers in a V” is an ideal introduction; strong, stable, and full of attitude. It is a combination of delicate vocals, pleasant toe-tapping mixed with aggressive undertones and hotel room trashing excitement. Exactly how you imagine it – a huge bundle of ideas with key influence from guitarist, keyboardist, and BVs, D.Ni.L.

Whilst I was working my way through the album, I heard so many experimental tones, key changes and vocal delivery with a test and learn approach, of course with that approach, some ideas don’t stick and that’s all part of finding ‘the sound’ but I was pleased to discover some really intriguing melodies and concepts in there. “And 4” again is just another example, from starting to absorb the alt rock sound, this is full of thought out production, vocal effects and emotional keys. For me its not one of the stand out tracks, but I thought it was worth mentioning as it could show the variety moving forward for members of this group.

Moving swiftly from “And 4” to “Numb” is relaxing, time to take a turn to chillville, oh no afraid not. This felt like I was dragged onto the dance floor, when I was quite happy sipping my beer at the bar. It certainly kicks off here. Just enough! The key / chord jumps in the chorus are sweet. It’s rough, raw and edgy sprinkled full of face-melting fuzz. Granted, it’s not polished but that adds to the charm, you can hear something isn’t quite bang on but its really enjoyable art.

The video release “Self Doubt” is 5 minutes but the more I got to know the band, I knew something would be thrown in throughout this track, somewhere. It begins pretty stable and tame but of course it all goes off again with the now unmistakable sound of that crunching fuzz guitar so prominent in many tracks. The accompanying video gives you a glimpse of the brains behind Wasabi, a pleasant collection who you would like as your neighbours it appears, until they have band practice in the garage and your artwork falls off the walls. Alternatively, go and join them for a jam.

A decent shout for stand out track of the album goes to “Not the Whole Truth” a reasonably tranquil opening until you find your way into the core of the piece and those emphatic sounds appear again but something is different here? Every now and then with unsigned creatives, something pops out that is a level above the norm. Whether on purpose or not but elements of the chorus and verses sound familiar, and by that, I mean polished and mainstream. The structure and delivery here was worth a mention. A twisted dream, yes but they hit the mark with this.

So overall, Wasabi Fire Alarm is a group of ideas bursting to get out. “Two Fingers in a V” has 10 songs full of contradictions and exciting twists and turns. It’s like a cult film that offers something new to returning viewers, hugely inspired by D.Ni.L. It’s rough; it’s raw but tender and quirky. A rock rebellion, a go out and have fun approach mixed with professionalism and purpose!

More on Wasabi Fire Alarm and “Two Fingers in a V”