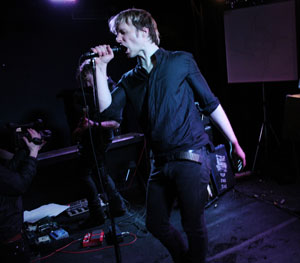 Following on from the recent release of his latest album “The Golden Foretaste Of Heaven” Alec Empire has been playing some rescheduled UK dates, I was fortunate enough to catch him at Camden’s Dingwalls. Perhaps the late notice rescheduling of the gig could be attributed to rather disappointing attendance, however what may have been lacking in numbers was certainly made up for in costume array.

A devoted throng of heavily pierced fans who were dressed uniformly in black with the notable exception of several neon hairdos’s waited eagerly around the low set stage. As the band took their place the audience found themselves within inches of the front man (a fact that our photographer’s close-ups bear testimony to) the separation between the stage and the crowd is barely noticeable a feature that makes Dingwalls one of London’s best venues of its size.

As one uninitiated in the realms of Digital Hardcore, the sound which Empire single-handedly created over a decade ago with his controversial noise mongering band: Atari Teenage Riot, I was prepared for a full on sonic assault on the realms of decency and expectant of sounds blending the elements of all that is extreme about music, from fractured Techno breakbeats to the grinding industrial guitars of the dirgiest of heavy metal all wrapped up in a futuristic digital blanket of distortion.

Much of that was certainly there on display, especially towards the end of the set; with the trademark layers upon layers of distorted soundscapes pierced with manipulated sped up beats and punctuated with the Empires relentless vocals like a cross between Iggie pop and Mark E Smith.

However a side to Empires new sound whilst not exactly mellow certainly indicates a step in a different, dare I say it, more mainstream direction from the more definitive offerings of his earlier solo work. The new album has been released on Eat Your Heart Out Records, which seems to be a platform for some of his more commercial offerings having reserved his Digital Hardcore label for the more underground side of things.

Whilst the tracks from the latest album still wouldn’t be likely to be categorized as pop, there is certainly a more melodic presence and even a discernable rhythm to dance to; you could almost call it club-friendly, which was certainly never something Atari Teenage Riot could have been described as.

Alec Empire claims his new album to be a reflection of modern Berlin and with its uber-cool dance scene you can see why this might have this kind of effect on the sound. Whilst this development may open doors towards commercial success and still maintain artistic integrity, there was something about the extremity of the Digital Hardcore scene which seems to be lacking from Alec empires current format which is a shame – if you like that sort of thing.