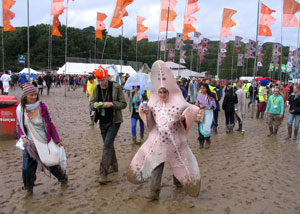 If you braved Bestival 2008 and went the distance, we owe you a smothering of respect and a bit of jealousy to boot. Our editor in chief lasted one night before heading home. She blames it on her companion but we don’t believe it for a second.

The troops that stayed on the frontline had a ball. For festival-goers, the muddy event went down in history and the soggy masses vowed to go back for a serving in 2009. Event organisers announced the 2009 Bestival dress up theme this week. It’s a good-un; get your moonboots on baby.

With 2009 being the ‘Year Of The Spectacular’ they have decided to get cosmic for Bestival and go with an Out of Space theme. So whether you’re going for a Buck Rogers disco get up, rocking the Star look travelling to Alpha-Centauri or painting yourself green to try and catch Captain Kirk’s eye, it’ll be out of this world.

Taking a few seconds out from planning next year’s event Rob da Bank said: “Its only been 3 months since we peeled off our underwater outfits at Bestival 2008 but we’ve had so many requests to get on and announce the theme for 2009 that we gave in! I’m tweaking the exact title as we speak but due to popular demand from our ever busy forum and the fact that next year is the 40th anniversary since Man landed on the moon, it’s a Space theme -Out of Space, 2009: A Space Oddity, Alien. You get the gist! So get needle and thread out, dig out the dressing up box and prepare for lift off!”

Bestival will take place on the 11th, 12th and 13th September 2009, so you’ll have to get your thinking caps on, as that only leaves t-minus ten months before our intergalactic love mission gets under way, which should give you just about enough time to come up with some stellar ideas. Keep an eye out for the headliner announcements early next year, which are sure to get your celestial bodies moving.