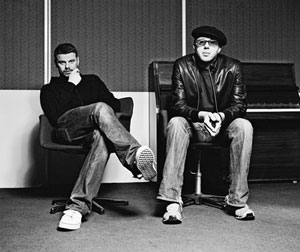 Science reigns supreme as The Brothers do it again.

After waiting for an hour and half to be let back into The Roundhouse due to “some type of emergency” which required everyone to “head to the nearest exit”, everybody was expecting more than just good for the inconvenience caused. Bearing in mind that I had seen The Chemical Brothers back in 2002 at Brixton Academy and the visuals as well as the soundtrack itself had been outstanding – mine were high expectations to surpass.

With no information being given as to the situation inside the building, and supplies of beer outside running low the frustrated crowd got louder and rowdier. Throwing plastic cups and banging on the walls outside (sounding like monkeys trying to escape from a cage).By the time it got to 22.20 it seemed that all was lost and that the gig was about to be cancelled.

But when we were all let back in and the crowd settled in the unsurprisingly round auditorium the show started. The Chemical Brothers opened with an array of visual wonders and the juggernaut that is Galvanize: I was like Dorothy in awe of the Wizard of Oz. The visuals just got better and better; with bucking donkeys, “IT” style scary clowns, butterflies, dancing robots, marching elephants, kaleidoscopes and prowling tigers.

The show that “The Brothers” put on could have easily rivaled the likes of any James Bond computer generated extravaganza or equally well stood its ground against any million pound New Year’s Eve fireworks display.

Taking a good mix from all their albums and matching the graphics effortlessly. Be them the likes of body popping shadow dancers mimicking the beats of Do It Again, bowler hat-clad gunmen shooting to the sound of Out Of Control or flying through temples at the speed of Believe.

Even though we had been waiting for over an hour to start the gig, it was absolutely worth it. The only criticism I have is that as the show started so late, many had to head home early to get the last trains and tubes.

But I didn’t – I stayed until the very end and was so glad I did! Amazing!

Have you seen The Chemical Brothers live? Dod you rate them or hate them? Post your reviews and messages in the comments section.