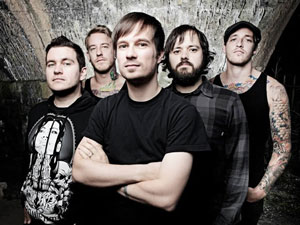 It’s a freezing cold, slightly frosty Tuesday night outside, but inside none of that matters. Welsh trio, Incase Of Fire have just finished their set, to no major disappointment, and Nottingham is about to get the full Cancer Bats experience.

Cancer Bats, from Canada, are something quite special. Described as mixing “hardcore, Southern Metal and Punk Rock into a lethal explosion”, they are quite fantastic. Oozing energy and enthusiasm from the first second they get on stage until after the end of the last chord has long faded away. Vocalist Liam Cormier, the man I’d most like to meet this week, is a non stop ball of action, and you can’t help but get swept up in his wake. Cormier is this way, that way upside down and back to front and taking the crowd with him. They seem to love it.

Cancer Bats deliver an awesome set, giving the headliners quite a hard act to follow, and Funeral For A Friend don’t disappoint. Playing a brilliant mix of old classics and new tracks the band are on top form. Vocalist Matt Davies proves that he has turned into a captivating and charming front man, taking plenty of time to chat to the crowd and inform them about the practice of safe sex, a theme that runs steadily throughout the night, much the amusement of all in attendance. Stand out tracks tonight include ‘Your Revolution is a Joke’, a beautiful stripped down performance by Chris and Matt that provokes a sea of lighters and phones to be held aloft. Beautiful. Old favorite ‘Juneau’ is sung, by crowd and artist alike, with much love and enthusiasm, and the last song of the night ‘Escape Artists Never Die’ is a triumphant end to what turned out to be a pretty spectacular evening. Highly recommended.