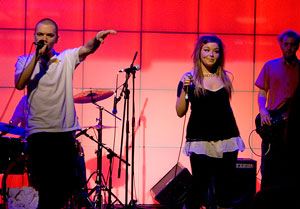 THE WEEK THAT WAS

I don’t know if it was the weather, the smoking ban, or, that everyone’s on holiday; but I have never been to a venue that was as deserted as 93 Feet East last Wednesday. This place is usually heaving, even midweek, and the quality of the performers was certainly not a factor. Each performer had an entourage of six to ten people, who promptly left after their mates had finished their gig, which meant that, apart from the entourages, each act had an audience of; well, me. As many of you know, Brick Lane is the home of wall to wall Indian restaurants which all seemed to be doing good business on Wednesday, so I can only think that this gig was not well publicised. The free evening papers listed it but said that the nearest tube was Liverpool Street; however, the local street map in that Underground station does not show Brick Lane. Maybe the audience are still trying to find it. For future reference, use Aldgate East on the District and Circle; it’s a long walk but easy to find.

The show opened with Wallis Bird, a very talented and extrovert young lady from County Wexford in Ireland. She has band but was on her own on this occasion, presenting her songs with her acoustic guitar as backing. Her songs are very intense but melodic, with lyrics and emotion on the love songs that reminded me of Ryan Adams at his darkest, though she does not list him as an influence. Her EP “Moodsets” is out on Monday, and “Counting To Sleep” is the itunes single of the week on 6 August. An excellent singer/songwriter who, like all the artists in this review, can be found on myspace.

The Conway Story are a prog style indie band consisting of Nick Owens on vocals and guitar, Russ Dyer on bass, Jimi Kerr on guitar, Nicholas Hirst on keys and Lenin Alegaria on drums. Good vocals with fine playing, although the sound didn’t do any favours to the keys and lead guitar, which tended to blend together too much. The songs were good with a fine mix of upbeat and ballad, and these lads look good and present themselves with style. Keep an eye out for them. Mr Smith and the B Flat Band are so South London as wellas being Ryan on vocals, Nigel on guitar, Byron on bass, Sam on drums and Scarlet Rose on backing vocals. They describe themselves as rock/ska and their songs cover unrequited love and dodgy Croydon taxi drivers among other things. “Stuff That Makes Me Smile” and “Jackie Love” were good and the fact that Scarlet Rose sounds like Barbara Windsor is no bad thing. Very entertaining and worth a listen. It was really too bad that there were so few people in the audience. If Eddy Fink was there he hadn’t made himself known when I left at just before eleven as the bouncer was closing the club and moving us into the bar area. Good evening, well for me anyway.