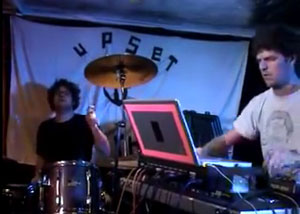 Pivot played the small grotty confines of Barden’s last night. It’s the kind of venue that can handle the brand of experimentalism. The night would have flowed better if their set was longer, allowing the tracks to be drawn out for much longer, rather than jammed up against the Roxy Music keyboards of White Williams.

The Sydney-based band’s set up is basic, with drums, keyboards and guitar, but their electronica swathes over you, and immerses you, making you forget that there are only three people on the stage. They start off with ‘In the Blood’ which is the forthcoming single. The video that’s accompanying it was created by Alex Park, who directed Coldplay’s ‘Yellow’. Featuring blood-spurting fish, and rejected Thunderbirds-like mannequins, it makes the track a backdrop for projecting strange fantasies.

On their website they list Garth Marenghi, Aphex Twin – their labelmate at Warp – and Brian Eno as their influences. Even though the final one is jest, there is definitely a heightened sense of drama to their music. It veers between sounding like the opening sequence to a hospital drama, complete with life machine noises, and being deeply involving, and complicated in the best way of electronica. ‘Didn’t I Furious’ is far darker, and stompier, with crunching synth sounds and brittle guitar chords. The two different tracks showcase how they move schizophrenically between sweet and melodic and heavy and brooding. Does epic-lite capture their contradictory nature? Alongside other recently feted acts like Zombie Zombie, Pivot are offering up a more accessible alternative to the maudlin epic nature of post rock and the glitchy loops of Battles.