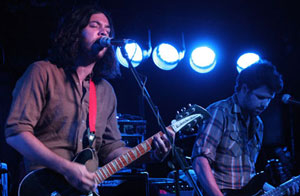 The Outline are half way through their UK tour with the Australian Rock band, Powderfinger. All the way from the United States of America, The Outline have brought with them a hand full of crunching guitars, crashing vocals and some serious Rock tunes.

We chatted to The Outline boys who gave us some interesting answers to chew on when we asked them of any strange encounters they had on tour and what they would like for Christmas. We didn’t ask them their desired question though – we have to draw the line some where.

Tell me about where in the world you’re from?

We’re all born and raised in Los Angeles

What do you think of London?

We love it here, we’ve had an amazing time. Hopefully we’ll be able to come back and tour as often as possible in Europe.

What’s in store for tonight?

Tonight we play Birmingham Academy and hopefully we’ll meet some nice locals to go party with – we have a day off tomorrow so tonight should be pretty nuts.

What song are you going to open with?

Aesthetics – It’s the first song on our record – “You Smash it, We’ll Build Around it”

Powderfinger are my fellow Aussies… have you had much of a chance for backstage banter yet?

Yeah we’ve hung with them a bit, they’re great guys – incredibly nice. We’re eternally grateful to them for having us out on this tour. Hopefully as we get further along the tour well get to get into some adventures together.

I’m sure there’s a lot Australians in the crowd – was the reception good?

Yea absolutely. I mean, they’re definitely there for Powderfinger, end of story, but I think we won over a fair amount. I had some middle aged Brits approach me and they absoluted loved our set, which was cool.

What are your backstage requests?

Hummus, booze, bread, water, and towels. We’re pretty easy to please – if we’re lucky we get some tea and honey, cheese, and a shower.

How did you guys get together?

Austen and I started the band when we were about sixteen – we were high school friends, then we found Max a year later through mutual friends and we’ve been living together since 2004.
You’ve been working hard all summer making songs for your next record…

We actually recorded “You Smash it…” a long time ago, in 2005 I think, and it came out in the US in July of 2006. But it’s coming out in Europe for the first time this year. It’s a collection of songs that we wrote between the ages of seventeen and twenty so it’s a nice catalogue of what we were creating at that time in our lives. It’s a rock record, but with lots of little segues into electronic music, a musical, and even some salsa and jazz. What I love about it is it’s range – you don’t get stuck in one type of song repeated twelve times, instead it’s a group of very different songs that we’re still really proud of.

Do you remember the first album you ever bought?

Sadly I can’t remember – maybe Bryan Adams – So Far So Good, ha, but my big brother got me into Guns and Roses and Metallica when I was five. And Tom Petty was definitely one of my early heroes.

It’s planned for release in March next year – are you gigging solidly until then?

We hope to tour as much as we can all of next year. Hopefully we’ll do plenty of US dates and then come back for another Euro tour. But we’re also working hard on our second album, which we need to record early next year – basically, we’ll be busy all year.

Fink has said you’ll be on the road for quite awhile; is touring the debauchery packed fun fair we imagine?

Hmm, most of the time yes. In the UK, since we don’t have to drive, it’s been the time of our lives. I personally love touring but driving in a van for eight hours every day can get tiresome and tedious. Still, being able to travel and play music is the dream. As for debauchery….we don’t get into too much trouble, but there have been some pretty awesome times. Our dressing room in Portland, Oregon turned into a stripper rehearsal room for one gig, so it was us and 20 naked women. Oh, and there were donuts.

Tell me about your tour bus…

We’re not in a tour bus yet, we’re enjoying the luxuries of van touring. Just a big ol’ van that we’ve taken all the seats out of so we can lie down in the back. Don’t tell the cops though, I think it may be illegal not to use seat belts…

Any weird experiences during life on the road?

Max got his wallet stolen by a psychotic prostitute in Tennessee, so yeah, shit gets weird sometimes.

You’ve toured with My Chemical Romance, Jack’s Mannequin, Panic At The Disco and Ben Lee… who was the best to hand out with backstage?

We know the Jacks Mannequin gang the best, they’re really good buddies of ours and we always have a blast. We hang out in LA with them and have crazy whiskey nights.

My virginity back. Or a bicycle. Either / or.

What’s the most memorable gig you’ve ever been to as a crowd member?

David Byrne and the Arcade Fire at the Hollywood Bowl was definitely one of them. He covered Beyonce and had a marching band with strippers come out for the finale. Or David Bowie at the Shrine in LA. He’s just a hero. Unbelievable

Is there a question you wish interviewers would ask you?

Not one in particular, but I love ones that catch me completely off guard – like: how big is your weiner?

You still have the chance to catch The Outline on tour with Powderfinger. They are playing till December 12th.