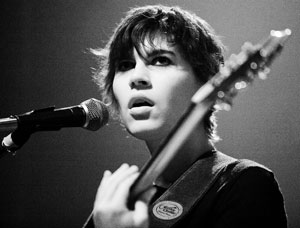 “She shredded it 10 times better than I’ve ever played it.”

Not everyone gets this type of guitar wielding praise from the likes of Dave Grohl. American guitarist and songstress Kaki King has certainly earned praise from the best of the finger twiddling bunch. We hear that Pearl Jam’s Eddie Vedder is also a fan. It’s no wonder really, the feisty little vixen was one of only 20 guitarists named as Rolling Stone’s ‘New Gods of Guitar’.

Her sound is unique and striking; soft guitars and an eclectic arrangement of instruments layer each track adding an alluring depth. Quiet willowy vocals lie over her songs, adding a sprinkling of femininity and meaning. She makes the type of music that you want to surround yourself in when you are lying down in a dark room or when you are strolling around on a breezy summer’s day. Her music tinkles with a melancholic undertone – but don’t get out the tissues just yet – it’s also pretty and uplifting. At the age of five, Kaki King was encouraged to play guitar by her music-mad father. Having been a musician for so long, it is not surprising that Foo Fighters’ Dave Grohl asked Kaki to feature on his new album Echoes, Silence, Patience and Grace.

When we chatted to Kaki, she stopped every few minutes to cough and splutter her way through the interview. A gig at the Luminaire and fast accumulating Frequent Flyers points had taken their toll. Despite the husky voice, she remained chirpy and managed revealed the secret to success in the music industry. We also talked Dave Grohl and Sleepytime Gorilla Museum – intrigued?

At what age did you pick up a guitar?

When I was about five but it was because my parents wanted me to. Drums were something that I got to choose – they were my personal fave. It was definitely the guitar than influenced me more. I did always play guitar though; then the guitar and drums caught up with each other.

Do quick fingers run the family?

Its actually not; it’s not a King family tradition to be musical. We are a very small clan and there are just no musicians – I am the only one. It is obviously something that got passed down from somewhere. The main thing is that my dad is a complete music obsessive so there is something in the blood but I am not sure exactly what it was that made me.

You names as one of Rolling Stone’s top 20 Gods of Guitar. That must have taken a lot of hard work. How many blistered fingers has it taken to get to that level?

When you are nineteen and you are stuck in college with nothing much to do, sitting around playing guitar doesn’t really feel like work. It was just the combination of playing and writing and wanting to push myself. People don’t understand that practicing doesn’t have to be six hours a day. From doing sport to doing homework, I kinda understood what practising meant. When you love it, you kind of want to play.

Imagine that we set you free in the worlds biggest guitar store with a limitless budget; what do you come out with?

Oh, God…I think I would buy a 67 Lee Paul Deluxe Gold Top. It is a guitar that I used on a record recently – it is a very superior instrument.

Dave Grohl is a fan of yours; you featured on their album ‘Echoes, Silence, Patience and Grace’. What are the guys like to work with?

Oh, they are fantastic. They are really rock and roll! I always think of people being opposite to their stereotype so I thought that they would be sitting around reading or drinking tea – but were not. They like going on about Led Zeppelin and Rock and girls. They are the best though, he is the nicest person; he is so sweet. Honestly, I don’t even deserve to get as much credit as he has given me. He’s like ‘yeah, we did this great track with this chick Kaki and she is f****** awesome,’ which is incredibly generous for him to be talking me up – it just so nice of him.

Having fans like Dave Grohl and Eddie Vedder must be amazing. Do you get a lot of young fans writing in to you for advice?

Yes, I do – a lot. At gigs, they will bring me their records or talk about their bands. A huge part of my fan base is musicians. I just tell people to forget about the posters and forget about the t-shirts and venues and just work on your music until it is something that is undeniably good. Then, no one can say that it is crap or that they can’t play or write – just love your own music. The best thing about that is when something is good, word of mouth – something that you can’t buy or manufacture – will happen. That is the most important thing that you can do for your career. I tell people not to worry about sending a press kit out; just play really good music and make it as good as it can be.

Your new album, Until We Felt Red, is out in November. Was it a long time the making? I read on your MySpace blog that you felt as if you had been caring for a litter of puppies but had to leave them at the kennel for a while. When you came back, they had become gigantic, slobbering dogs that had to be trained.

That is in reference to the brand new record which will be out in the spring. I felt like you can’t see the forest for the trees when making a record. I went upstate for two days and then came back and listened to the mixes. I was like, who is this person? What is this record? You are just going at it everyday and adding ideas and then when you listen to it, you are like oh my God! At the time there were so many tracks – I have never had so many tracks on a record – they had to be tamed.

What was the process like for Until We Felt Red, which is out in November over here?

The making of that album was short too. I did it in Chicago; I came very well prepared. I mapped out everything that I wanted in demo form and I had taken loads and loads of notes. I left enough room for inspiration to occur but a lot of it was just me being me. I think we tracked the record for seventeen days and mixed it for another week so it was under less than a month.

One last question, what was the best concert that you have ever been to as a crowd member?

I just saw some really good stuff in Paris. In three weeks, I managed to see Incubus, Feist and Ani Difranco. I think the best concert that I have seen – because it was so cool and unexpected – was a band called Sleepytime Gorilla Museum. They are from Oakland, California. They are just absolutely insane; they are kind of like a art, hardcore band. Their stage show is unreal – even in a small club. It was a couple of years ago that I saw them but I still talk about it. It was so f***** fun.

Yep, it’s sealed. Not only does this assertive little lass fulfill the dream we all have of mastering the guitar. she blows the rest of the string picking masses out of the water. See her live – it’ll either inspire you to get a few more lessons or make you hang your head in collective shame and adoration. Kaki King’s album Until We Felt Red is out NOW.

Check out Kaki King on Seatwave. For more info on Kaki King go to her website at www.kakiking.com or check out her MySpace. Or for instant visual gratification, check out the video Dave grohl has been pointing the masses towards.