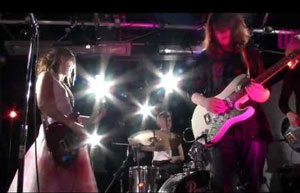 Hello and welcome to another week in a city that will prove to be as multicultural as you like as time goes on. It all started out in the 12 Bar Club which, on Tuesday, played host to some of the best folk/rock performers from the UK and Italy. There was lots of collaboration and lots of good music and a long and enjoyable evening it turned out to be.

Andy Hank Dog
Formerly of The Hank Dogs and, briefly, The Sex Pistols, Andy acted as host as well as performing a few numbers. He’s a great guitar picker but some of the lyrics were a bit dubious and he does not appear to have any current internet links.

Emma Tricca
Emma is a London based acoustic folk artist who works a lot in Italy and has a classic claw hammer guitar picking style. I had not seen her for ages, prior to me starting this column, in fact, and it was good to hear her delicate vocals and great playing once again. She did some nice folk and a bit of country before ending a good set with Arlo Guthrie’s classic “Coming in to Los Angeles”. They don’t write songs like that anymore, for various reasons, but she makes an excellent job of it.

Simon Alpin
Simon plays guitar and sings alternative folk, on this occasion accompanied by a lovely girl called Rhiannon, who played some good fiddle and wore a pretty dress with a funny pattern on it. “Is it Gone” was a country ballad, “The Right Words” was darker and the whole set was enjoyable.

Trevor Moss & Hannah Lou
Sometimes known as Indigo Moss, this recently married duo write great songs like “The Allotment Song” and “Standing Down”, often adding harmonica along with the guitars, and have superb harmonies that appear to be interchangeable. “Never Gonna Ride That Plane” was another good one and I recommend that you check them out, as I intend to.

Luca Serio Bertolini
The first Italian act of the evening, from Reggia d’Emilia, gave us a great set of folk and folk/rock that touched Irish jigs, country, and rocky items like “Ubriaco di pace”. Good vocals by Luca and violin by Alessio made this a very enjoyable experience

Pete Greenwood
Another great finger picker and vocalist keeping up the English end of this acoustic extravaganza, and adding some folk blues to the mix. His own songs were very pleasant and the addition of Neil Young’s “Cripple Creek Ferry” rounded things off well.

Dudu, Fry & Danielle with Jason McNiff
This was the event of the evening, namely the collaboration of members of the Modena City Ramblers and Jason and his band to perform an incredible set of mostly Italian material. Davide Morandi, Franco D’aniello and Francesco Moneti took care of vocals, fiddle and accordion while Jason and his boys did vocals in English and Italian and provided the rhythm. From the opening with an Italian version of Dylan’s “Love Minus Zero No Limits”, these guys covered Italian resistance songs, one of Jason’s compositions and lots of stuff that had Spanish, Balkan and rock influences. I so wish that I spoke Italian as it would have made the performance even better than it already was. On this occasion, it really was great to be a European.

Sid Griffin
This London based former member of Long Ryder and the Coal Porters kept us entertained with good versions of originals and covers mixed with heckling and banter from and with Andy Hank Dog. Sid is another fine guitar picker, who knows a thing or two about how to play country music.

Benjamin Thomas
This acoustic/folk/blues guy, who I last saw at the Half Moon in September, used to be 60’s Dylan and angry. The Dylan influence is still there, but he just seems to get nicer and more audience friendly all the time. Maybe he read my column. “Hole in My Heart Blues” was as you’d expect and “If I Close My Eyes” was a folksy ballad, all of which added up to a good listen which the audience seemed to warm to.

Trent Miller
Gothic country blues is how Trent describes himself and he is often billed as “and the Skeleton Jive”. Some good songs here, particularly “Whispers of a Fool”, which was sung pretty well and supported by guitar and harmonica. Another good acoustic singer/songwriter, who I will no doubt see again.

Martin Newman
On Wednesday in London, there are a lot worse things that you can do with your evening than go to The Big Secret at Ginglik on Shepherds Bush Green. This week, we were treated to the usual selection of above average acoustic performers and even a band to finish off. Martin Newman opened with some very good songs accompanied by Andy Parkin on fiddle, a gentleman who would be back later in another role entirely. “Come Back, Gracie” was a lively start, “Nightfall” was a little darker and “Toothbrush” had a nice hook and an urban feel. A good set by a very competent performer.

Michael McCaffrey
Michael moved us along with some very positive love songs like “She Sings” and “Don’t Throw Away My Heart” as well as “Eternally Yours” which was a bit Neil Young. He usually works with a band under the name “Isadore & Clay” and has a fine clear voice which is worth a listen either way.

Jo Stevens
This London based pop acoustic performer has some good songs that get pretty commercial at times, like “I Know a Place” which has some alternative country in there. She moves easily between country, ballads and rock stuff like “I Shouldn’t Be Looking” and “Alone on a Beautiful Day”, all of which she performed well; well enough , in fact, for me to want to see her again.

Simon Jaymes
Another great set from Simon, despite not having his excellent guitarist, Adam Drake, with him. New stuff like “River People” and the jazzy “Sailboat” were great and the intricate, well constructed “My Dreams” deserves to be listened to often. How better to finish than “Monsters”, one of my personal favourites from so many good songs by this guy. He has a new EP out with most of this stuff on, so make sure you buy it.

Jo Webb & the Dirty Hands
This band was a great way to finish a great evening, with their strong vocals and harmonies and clever double guitar solos. Andy Parkin was back on keyboards this time and front man and singer Jo Webb did some nice guitar work along with David Marks. David Laycock on bass and Nick Oliver on drums rounded things off nicely and songs like “Acrobat” and “Stairway to Heaven” showed how they do commercial rock very well. “Smoke on the Water” was Beach Boys meets heavy metal and the whole set was tight and good to listen to. While still at Ginglik, I am pleased to report that the club has had a reprieve from closure for the time being by the council, which is certainly good news. For full details, check their website.

The Thin Men
Friday found me at the Bull & Gate, a good old rock pub in Kentish Town to check out a band that I had not seen since a gig at a Zarathustras night at the 12 Bar ages ago. It was not this band, I might add, but they were as good a way as any to start the night. They are a four piece with a good front man on vocals and guitar and clever use of synths. “Nowhere” and “Who You Are” were good examples of what they do and, unfortunately, their my space isn’t working, so go to their website.

Moody McCardle
This was the band that I mentioned earlier, and a pretty cosmopolitan lot they are too. London based, this band is fronted by Tommy McCardle from Ireland on vocals and guitar, Anthony Clayton on lead guitar, Serge Saint-Rose from Martinique on keys, Wu Yen Chan on bass and Christophe Meyer from Switzerland on drums. They are solid rock acoustic with some decent songs which they perform well with sound rhythm and some good solos from Anthony. “Fractured Soul” and “Don’t Give Up On Love” stood out and the band is worth a listen.

Ghostfire
Here is a band that you will remember if you ever see them, even if you don’t like them; the reason being the charismatic and highly effective lead singer, Steve. Not only is he a great vocalist, he uses every available inch of the stage and throws himself, literally, into every song he performs. The sound is a bit like The Killers with heavy metal influences and all the songs are well rounded like “Vaudevillain” and “Ghostways of Paris” to name but two. Highly recommended, trust me.

Fat Lips
To close the evening, we were treated to a purely instrumental set from these young guys who appear, for the most part, to be North American. Mainstream jazz was the order of the day with influences from the likes of Blood, Sweat and Tears. Trumpets, saxophones and trombones fronted a rhythm section of tuba, drums and electrics and earned an encore demand from the very receptive audience. Catch these guys whenever you can.

So there you go, the world is your oyster when you live in London so come out of your shell and get gigging. In addition, stay safe and well and see you next week.