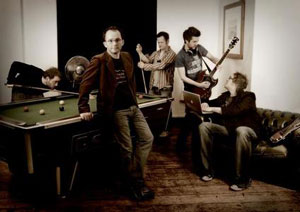 The very title of this section is misleading as I have only been to one gig this week due to the extreme cold (a lousy excuse from a guy who used to live in Toronto) and the fact that there weren’t many. So this is the calm before the storm as things will certainly start hotting up next week, at least on the indie scene. So, my one and only foray into the arctic extremes of Indie this week was The Big Secret at Ginglik on Shepherds Bush Green.

Jo usually performs with his band, The Dirty Hands, and did that very thing back in November at this venue. On this occasion he opted to keep it clean and do a solo set, which included songs from their Greatest Hits EP which consists of new songs with famous old titles. In case you are confused, he opened with “Bohemian Rhapsody” but not as we know it. This was a well constructed (as was the other one) song that broke the ice nicely and probably literally. “Master of Puppets” was similar and “Acrobat” was the title track of the new album. Very professional stuff, which stood up as solo work despite the fact that the band really rocks.

If you like to hear a guitar picked to perfection and are blown away by a mix of blues, country, rock and a lot more, Marcus is your man. I loved his set at the Bedford last April and Wednesday was no disappointment. He opened with a country blues cracker in “The Girl I Need” and amazed us all with the pure delta blues of “Now I’m Gone”. “Hard Times”, the title track of his current album, was everglades, swamp rock and “Knock Me Down” had blues, country, folk and rock driving it along. Marcus is apparently in much demand as a session musician in this style and I am not at all surprised. Make sure you see him, soon.

This striking young lady certainly impresses with her rich voice and well crafted songs. “Out of the Shadows” was folksy with some jazz and blues to give it an edge and “Softly Now” from her Fortune Teller album was an above average ballad. “Satan’s Wife” was, as you would expect, a bit dark and her version of Charles Asnavour’s “La Boheme”, in excellent French, was beautifully done. A great set from a performer with a lot to offer. You can find her on Fuzzy Muscrat Records.

Nathan is another fine acoustic singer songwriter with a clear vocal style and some quite technical guitar which, nevertheless, does not distract from the quality of the material. He has a very clever finger style which can be jazzy as on “Footprints”, but “Hideaway Snowflakes” was a bit James Taylor. He uses tunings sparingly but effectively and his lyrics are enthralling. Another fine exponent of acoustic music who has an album out on River Rat Records.

This mostly keyboard driven singer songwriter was a bit the heavier side of Counting Crows, which is no bad thing, and performed some good but unannounced material. Strong vocals and keyboards prevailed, though “Dolphins” was well constructed and used guitar to fine effect. “Crushed” was another powerful rock ballad and you can hear all this on Itunes, Amazon and DONYMAR Records. I think you should.

Things are certainly looking up next week with pretty well all the clubs back on track. Monday has the Half Moon, Putney bursting with talent which includes Rachel Hatfield, Karim Fanous and Richard Fuller. On Tuesday there’s some good rock at the Bedford, Balham with Paul Bullen, and the classy keyboard lady with a dash of French, Ana Silvera, is at the Soho Review Bar. The unusual but highly entertaining Thee Single Spy are at the Electroacoustic on Wednesday while Karim Fanous can be found again, this time at Ginglik along with the wonderful Eliza Wren Payne. Thursday warrants a visit to the Bedford again for the soon to be mega Simon Jaymes while the excellent and rarely seen of late Erica Steenkamp will be gracing The Green Note in Camden. Moving on to Sunday 18 January, check out Deeds of the Nameless at the Water Rats in Kings Cross. So, it looks as if I will be busy next week so I had better start resting up now. Make sure you do as well so that you can take in as much of this good music as possible. While you’re at it, stay safe and well.