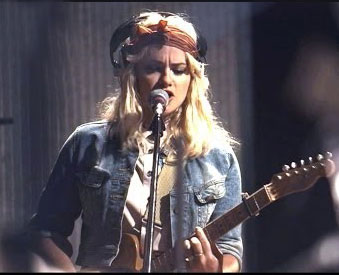 The live action began this week on Monday at the Electroacoustic Club at the Slaughtered Lamb pub in Barbican where there were a couple of acts that I was keen to catch up with and some surprise guests. Well, there were some surprises, as only one of the acts that I had come to see actually showed and there was only one other performer on the bill. Fortunately, they both did long sets and were very entertaining.

I saw Sam for the first time in April at the Half Moon in Putney at a gig at which he was, as on this occasion, a last minute addition. He is a superb singer/songwriter influenced by the likes of Dylan, Young and Jansch as well as the legendary guitarist, Doc Watson. His vocals are rich and sound, his guitar style varying between flatpicking, finger style and frailing along with a bunch of different tunings; and his songs well built and listenable. He plays a pretty mean blues guitar as well, with a voice to match and, did I mention his harmonica playing? Well, that’s pretty impressive as well. In addition to his own excellent “Jack and Louise” and the Appalachian sounding “Dangling Man” there was a Davy Graham cover with fine clawhammer, “Satisfied Mind” inspired by Jeff Buckley’s version and the dark, shanty style “Captain Kennedy”, an obscure Neil Young song from the 1980 album, “Hawks and Doves”. We all enjoyed “More Than a Stitch or Two” and ”Great Bar Colony”, which were about London, and the blues was ably addressed with “Going Out on My Own”. An exceptional set, and you can see where he is next week in Next Week’s News.

I have been a strong supporter of this super young lady for some time, and the last time that I saw her was at the Borderline with her band, The Majesty. She had, at that time, been signed to Parlophone but has since been dropped, due I believe to the fact that they did not understand how to work with this sort of talent. With the right producer, I am sure that Alice could make a classic album and hopefully that will happen in 2009. In the meantime, she was on form on Wednesday with a selection of her old and new material, all performed with her usual passion. Before we even get to the music, she looked gorgeous with her long curly hair, pretty dress and little gold boots and bonded with the audience from the start. “End of the World” was a great rocky blues beginning followed by the slightly ska “Diamonds in the Dust”; and it just got better. “Before” is the sort of strong, passionate country rock ballad that tells you what Alice is all about, while “Everybody’s Right” was new, jazzy, ska, Balkan and great. I am convinced this lady has a great future and I recommend that you tune in to her now, before everybody else does.

It’s Wednesday and I am very enthusiastic about attending the Purple Turtle in Camden to catch up on a band that I have said several good things about in the past. I am also going be introduced to a couple of new bands and party with AudioTart editor, Katie Spain, who was there as guest host as the gig was connected to her work as a presenter on Extream East.co.uk. It’s a great venue on Crowndale Road and is very close to Mornington Crescent tube and Koko, and City Angels were the promoters. The Brent Flood, of course, were voted Best Indie Band in the INDY Awards 2008 and fully deserved it with their fine songs and tight sound. My only complaint at their gig at the Half Moon Putney in June was that they were too laid back (they all played sitting down) and acoustic. I can only assume that they read it as, on this occasion, it was all about Fenders and stage presence. Well, guys, all I can say is it worked (notice that I’m not saying “I told you so”). Jay Marsh’s vocals were outstanding and the band totally took over the stage making them a very hard act to follow. They opened with a couple of up beat indies followed by their excellent new single “Pleasure Seeker”, which is a rock ballad with a strong hook, brilliant vocals and is available on Itunes. By the time they kicked “Hey You” into place the night was theirs. Believe me, they will be big (and I won’t say I told you so)

These guys were pretty good but had trouble following the opener, especially in the vocal area. This four piece were tight alright and the vocalist had some of Lou Reed or Liam Gallagher about him, but the songs, though pretty good overall, were not “Wonderwall” or “Sweet Jane”, not to mention “Waiting for my Man”. The rhythm section was very fit for purpose and I did like the bell like sounds that the guitarist was getting out of his classic Rickenbecker. Nice hooks and backing track on “Fear No Fear” upped the ante a bit and “The Flowers That Fell” was quite hard and urban. I say give them a listen, there’s some good stuff going on.

There’s only three of them, but they can do very little wrong with their tight but funky sound and split vocals which was marred only by problems with feedback on the mics. They incorporate blues and rock with Simon Frost favouring the Hendrix approach to playing a Fender, and they look good with the frock coats and cowboy boots. Classic rock as it should be played pretty well sums these guys up, so, if that’s your bag, go fill it next time these guys are playing.