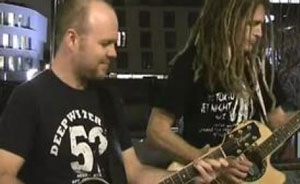 I have not been to the Bullet Bar in Camden since March, so decided that a visit was in order despite, or because of, the fact that I did not know any of the artists. The venue is a quite large and comfortable music oriented establishment with some comfy sofas and lots of standing room. Located on Kentish Town Road at the junction with Royal College Road it is midway between Camden Town and Kentish Town on the Northern Line.

Lee Thompson was down to headline the show with his band, but instead performed a solo acoustic set as the penultimate performer. This South African singer/songwriter is certainly a force to be reckoned with in his field, and an artist that I am convinced will be big very soon with the right exposure. He is a brilliant singer and guitarist with clear diction that emphasises the very accessible lyrics of his songs. I have to say that there was not a bad one among them, and his encore performing the Otis Redding/Black Crowes classic “Hard to Handle” was awesome. Check this guy out, with or without his band.

The show opened with Naomi and Andy, a duo performing their own songs to Andy’s competent guitar. Naomi has a good clear voice that was put to good use on songs like “All She Is” and “Fair Weather”. Their style is jazzy but a little too heavy at times, and their cover of “My Funny Valentine” did not work for me. Sam Jones did a very short but enjoyable set showing off his earthy voice and fine flat picking, block chord guitar style. The show ended with Vaughan King, another singer songwriter with a style that reminds me a bit of English folk music. Except, that is, when he picks up his 12 string for some bluesy stuff that even includes some slide. Good potential here, so I will check him out again.

My only complaint about last night would be the audience, who talked far too much given that it was an acoustic evening. Singers talked while other artists were performing, and groups that came to support particular artists even talked when their mates were on. Anyway, it was a good night and I recommend you check them out on Wednesdays; they used to charge.