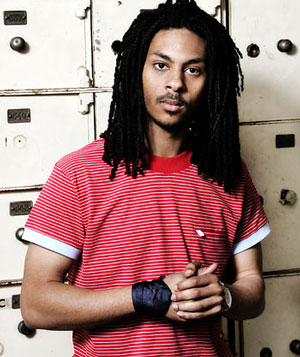 Take note music lovers. there’s a bright lad with a hefty head of hair and a large dose of funk pumping through his veins. His name is Leon Jean Marie and Mark Ronson has already had his wicked way with him. You could say you heard it here first – but chances are, you saw him support Amy Winehouse or The Roots. It hasn’t been an easy ride though.

Before this musician worked with some of the biggest producer-collaborators in the world, he was sleeping in cars, dabbling in drugs, sex and depression. It’s a cycle some don’t come out of. but Leon has come out with experience on his side and a groove in his step. We caught up with the musician ahead of the release of his single ‘Bed Of Nails’ (released early 2008). The track is taken from Leon’s forthcoming debut long player.

In the studio Leon has worked with Bloodshy (Britney/Kylie), The Rural (Gorillaz) and Mark Ronson, while mixing duties have been handled by Jason Cox. Watch this space. there’s more to this East Londoner than a mighty fine barnet.

Leon, you’re a funky looking character – tell us an interesting fact we wouldn’t necessarily know about you…

I have a secret passion for fishing.

Where do you call home?

Where my friends and family are close by.

What is your first musical memory?

Seeing and playing a drum kit for the first time, when my father brought me round who I always thought was one of his coolest work mate’s houses.

What instrument did you pick up first as a child?

It would be that drum kit, but my first personally owned instrument is the guitar I still play live today, I got for my 15th birthday.

Has the musical path been a good one so far?

I would say fairly turbulent, which I am very grateful for, because if the ride was too easy I don’t think I’d be this level-headed and wouldn’t appreciate where I am as much.

When you were sleeping in your car and roughing it, did you ever lose sight of your musical goals?

At that time, those goals were very much in the back of my head. I was too busy trying get by, each day at a time.

Anything you think you won’t like about life in the music-lane?

I could imagine being apart from your close ones would take its toll.

Your first single ‘Bed Of Nails’ is out April 7th. Lyrically, what’s the tune about?

The core of the song is about the state the youth is in today. However, I didn’t want the lyrics to come across like I’m preaching, which is why its written in 1st perspective.

Your debut longplayer is on its way too… what can we expect?

An album that represents my experiences, tastes and personality.

Mark Ronson flew you to New York after picking up on some of your early demos… although this was a while ago, was it a surreal call?

Surreal is the exact word. I just couldn’t believe it, and didn’t want to either. It was only until I was at the airport departing it was starting to sink in.

Has Mr Ronson given you any specific advice?

I have most certainly learnt from him but he hasn’t specifically given me any advice, not implying he is, but I actually found him quite a guarded individual.

You’ve also worked with Bloodshy, The Rural, and Jason Cox. You’re mixing in some influential circles. Anyone else out there you’d like to work with?

I almost had the chance to work with Wendy and Lisa from the ‘Prince and the Revolution” band, but due to other commitments we couldn’t, we spoke when Prince was in London to perform at the Brits. We haven’t lost complete contact so I am sure we will hook up in the future, which I am very much looking forward to.

You’ve toured with some of the best in the business already… The Roots and Amy Winehouse. Did they give you any advice?

Due to the manic process of the shows, none of us had the opportunity to chill and have a proper chat. Actually when I think about it, I remember stating the obvious to Questlove and said he is a genius, and he replied “bro keep doing what you doing, you rock.” You could imagine how big my smile was after he said that. However again like Ronson, I learnt a lot indirectly from these special acts.

Did you party with the headliners?

Unfortunately not. It was a very disciplined atmosphere, from sound-checking down to packing up, loading and making our way back to the hotel. All I can say is a lot of Poker went down, but no wild Rock’n’Roll antics happened.

Life in the music industry is likely to involve an element of limelight… are you prepared for it?

I would love to say yes but I would be lying. I am quite a reserved individual, and love my privacy, but I won’t view the limelight in a negative way because then I will stop enjoying myself.

I hear Radiohead were an influence… did you catch their recent Rough trade / 93 Feet East instore?

No I didn’t, I was in the studio working. However, I think it’s so cool what they’ve done, that’s one of the reasons why I looked up to such rare acts like them. They are always many steps ahead of the industry, and work outside the box.

Do you have a celebrity crush? (Here’s your chance to let them know!)

Sorry to be a spoil sport, but really I don’t have one. I gotta say, I sat close to Rosario Dawson at the Diesel Awards and couldn’t believe how beautiful she was, but no crushes.

What’s your favourite chat up line (do you even use them?!)

I really am too shy to have one, and if I did I wouldn’t dare march up to someone I like and say it.

As the clock ticked over to 2008 – did you make a New Year’s resolution?

My New Year’s resolution was to work even harder at everything, be it friendships, exercising or even cleaning up.

Has anyone ever tried to tell you to cut that amazing head of hair?

Yeah my mum (lol). She always has a laugh saying she should’ve had a girl.

What’s the most memorable concert you have ever been to? As an audience member…

It has to be Prince at the O2 and the after show gig at the Indigo club. It’s the first time I have seen him, I just screamed like a girl every-time he dropped a classic.