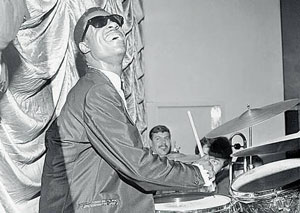 How many times have you descended on the bright lights of London’s West End and left somewhat unfulfilled at both the experience and the value-for-money? Well next time you venture out; try the smooth grooves and fundamental musical education that is Motown Revue at the Pigalle Club.

Situated in this classy outsider club, your first impressions are that of style and grandeur- a classic setup with winding staircases, an exotic bar and a cabaret club atmosphere. Take your seat for a very reasonable £15 and prepare to be entertained and educated in the fine arts of the musical sensation that rocked Detroit in yesteryear and London for many moons to come.

The versatile house band consist of the tools that make this experience come alive- bass, guitar, drums, percussion, sax, piano and trumpet rev the engine before the leader of this incredible pack, Patrick Alan struts on stage looking every inch the motor-city star. Ridiculously charismatic, Alan presents his show as it is- a celebration of fifty years of Motown and all the performers dress, act and is introduced as the Motown star they emulate.

The Funky Brothers – a four-piece singing sensation start the ball rolling with an opening medley of yesteryear hits before the entrance of the jaw-dropping Stephanie Benson. Looking every inch as beautiful as Tina Turner or The Supremes, with a voice to match Diana Ross or Aretha Franklin, it’s the so-forgotten glamorous side of club performance. Add to that the talents of the divine Kele le Roc; it’s easy to see why Patrick is so confident about this show.

The hits just keep on coming- as Alan, members of the Funky Brothers, Kele and Stephanie run through hits from the likes of The Temptations, The Commodores, Stevie Wonder and Marvin Gaye to name but a few, and it’s midway through that Alan pulls out another ace from his sleeve- dubbed ‘Little Michael’, Patrick has found a kid as cute as Jackson in his first incarnation to Pop- who can dance and sing. After performing a Jackson 5 hit, he and Alan head off into the crowd to spark an arm-wiggling frenzy- this is pure showbiz magic happening before your very eyes.

Even on this, the second preview night, the place was buzzing and by the time the short forty minute interval had ensued and Marvin Gaye’s ‘What’s Going On’ was being smoothly delivered, an impromptu dancing session had exploded. People of all ages, of all races and of many faces dancing together to the cool grooves of Motown, expertly delivered with a modern twist.

Still the surprises were not over as Alan pulled up little-known singer Jennifer Phillips to duet with him, who then proceeded to tear the house down with her amazing voice. This is just business as usual at Motown Revue- unexpected performances and up-close-and-personal moments with the stars of the show. Sure it goes on late, but if you want to see top-class entertainment and give kids an antidote to today’s processed Pop- showcasing stars who live and breathe music, get down to Motown Revue and dance your inhibitions away.