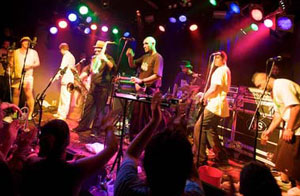 Every good New Zealander is familiar with Fat Freddy’s Drop; they’re a Soul force to be reckoned with. After winning over the crowd with an impressive Glastonbury 2007 set, the lads have been regular visitors to the UK. Ahead of their European tour, we caught up for a natter with keyboardist and resident foodie Dobie Blaze. The conversation revolved around crustaceans and jam.  The world is certainly their oyster… pass the tartar sauce would ya?

Set the scene for me… where are you right now?

I’m sitting in my studio actually, at home. I’ve got a little studio at home in Wellington. I’m just having my morning cup of coffee. It’s a nice warm day; it’s blowing a bit like it usually does in Wellington. I’ll probably head out for a game of golf soon.

You’ve got a bit of time to chill out then before you head off to Europe?

Yeah, I’ve got the day to chill out, do some packing and do some exercise and stuff before heading off. We’ve got a fairly long flight; I think we fly all the way to Lisbon this afternoon so it’ll be thirty-five odd hours of travel in one hit.

It was jamming really; I’ve been jamming since I was a baby. That’s the best thing when learning an instrument; to be able to hit the keys and do whatever you want.

It’s common knowledge that you’re quite the foodie. On the food front, which country are you most looking forward to visiting on tour?

I’m most looking forward to our first destination, Lisbon. Portugal has great food I just love it. All countries have amazing food but it just depends on whether the person looking after us takes us to a special spot. It doesn’t have to be flash or expensive or anything, it just needs to be local knowledge. I’m also looking forward to the UK. On our last European tour, the UK was the best of all the countries.

I know… all the restaurants I went to sourced local ingredients. There’s a big push to source local meat and all those types of things and it’s having a really positive effect on the food in the UK. I used to live there and it’s good to see it changing.
I hear you love mutton bird and whitebait. Is the British grub adventurous enough for you?

Definitely… we have mutton bird here and in the Scottish Isles, they harvest the same bird and do exactly the same preparation. They harvest it and salt it and then there are various other birds that are not common table birds at all. In the UK they have the same, very old preservation techniques as we do down here. It’s not particularly exotic compared to the other food in Scotland but the food there is amazing.

Do you hog the kitchen in your own household?

No I don’t actually. I mean, I love to cook when I get the opportunity but there is a bit of a fight between me and my partner. She’s a great cook too. I love doing dishes too but I really, really love it when someone does them for me.

You’re playing The Roundhouse on the 4th and 5th of December, what can the punters expect?

It’ll be a more intimate and prepared show that Glastonbury. With Glastonbury you’re just sort of backstage and then you’re thrown on to it and off you go. This time we’ve got a bit of time to set up and get things organised. Maybe new songs off the new album and by that stage of the tour we should be playing them pretty well. After five weeks of playing them on the road! I’m really looking forward to that venue and to those two gigs most of all. At that point the band will be feeling really comfortable. We’ve done a few gigs here before we left, just to get ourselves warmed up but there’s nothing like five weeks on the road to get things sounding really good. I’m confident that we’ll turn on a good show.

Yeah, we had the cartoon characters made at the beginning of the last album so it’s our alter egos I suppose.

If you could jam with either Jamie Oliver, Gordon Ramsay or Peter Gordon, who would you choose?

Peter Gordon all the way; I love his food and I love his style. Of course he’s one of us so that’s all good too. I have great respect for the other two chefs for sure but you know, Pete is the man as far as I’m concerned.

What do you miss most about home when you’re away?

I miss my kids and my family, my partner. That’s the thing that I miss the most. I also miss fresh fish and going fishing.

Five weeks is a long time…

Yeah, we stopped doing long ones because we did a few for six and seven weeks a few years back and they were just getting a bit hectic so we stopped doing them for the last two years and did shorter ones which I much prefer. This year we just decided to go for it; we’ve got out second album due out so we thought we’d make one good go at it.

There’s a lot of you in the band; is touring a pleasant experience?

It’s pleasant the whole time really. It’s such an easy going group of people and we’ve been doing it for a long time now so we’ve all got the routine sorted. Everyone knows how to behave. Generally.

The video for your new single ‘Pull The Catch’ made me want to head home via New Zealand. It features ‘Cay’s Crays’… what’s that?

It’s a caravan… basically, Dells’ auntie’s name is Cay and her husband is the fisherman on the boat in the video. His uncle and his cousin go and catch crayfish and they export it but a lot of it comes back to Auntie Cay and they cook them up. They’ve got their own cooking plant back at the house and then they have them for sale at the Cay’s Crays van.

One way to interpret the tune is the need for humans to work together. What’s the story behind it?

That’s definitely and undertone… it was a particular day, we were down in Kaikoura doing a gig down there. It’s on the coast of the South Island and we’d go down and play a festival gig down there and would stay down there and set up all the gear. A lot of our songs have been written in that environment. This one particular day Dallas’ uncle was going out fishing and invited us to go with him. We got up at four o’clock in the morning, jumped on the boat and headed out crayfishing. A lot of the song is just about the relationship between his uncle and his cousin; just working together and that day.

If the Queen asked you around for tea and scones, what would you ask her?