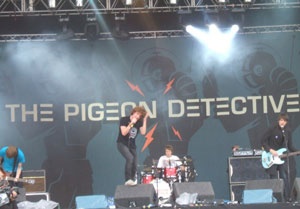 It’s bad news for the Pigeon Detectives fans out there…

The Pigeon Detectives would like to apologise to their fans for the late cancellation of two shows on their current UK tour. Singer Matt Bowman has been struck down with a chest infection and despite medical treatment at the venue, they were unfortunately forced to cancel last nights second Glasgow Barrowlands show.

Tonight’s sold out performance at Rock City in Nottingham has been re-scheduled to Tuesday 16th December.

The band have been touring non stop throughout 2007 and 2008 playing shows in America, Japan and Europe which followed the summer festivals. This current tour rounds up another successful year for the band who have now sold over a half a million records in the UK.

The new Glasgow date is still to be decided, but tickets for the original shows will be valid for the new dates, or refunds can be obtained at the point of purchase.

A bit of TLC and some chicken soup and he’ll be right. Make sure you head back to the audiotart site to post your verdict on the shows when they happen.