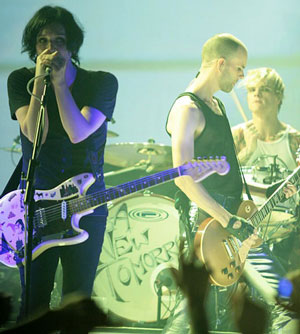 We live in a city full of cold London weather and a world full of atrocities such as human trafficking but luckily there’s music out there to make us smile. Placebo pull our collective heart strings more than most bands and we damn near cried when we heard this news. On 7th December 2008 Placebo headline the first-ever rock concert at Angkor Wat in Cambodia, a UNESCO World Heritage-listed 12th Century temple. The concert is being produced by the MTV EXIT Campaign to raise awareness and increase prevention of human trafficking. Also performing on the bill will be Duncan Sheik, Australian Kate Miller-Heidke, US group The Click Five and some of Cambodia’s biggest recording artists.

PLacebo frontman Brian Molko took some time out of his bag-packing to answer a few questions and tell us all about their monstrous gig. All we need now for Christmas is their 2009 world tour and their sixth studio album. Make our dreams come true Mr Molko.

When did you start writing music?

I’ve been writing songs professionally since I was in my early 20s and I’m now in my mid-30s. The way in which I approach song writing now is probably a lot less self indulgent and navel gazing than when I was younger. Your field of vision grows as you grow older and when you become aware of the fact that you are not the centre of the universe and aware that every action you have has an effect on your fellow man, you become sensitive to subjects that are outside your immediate life but you also become aware how they affect you so the things I like to write about are becoming a little broader.

How has this personal development affected the music you make?

When you make a record every two years you change as a person and your outlook on life in general changes, that’s always reflected in the music. The new album is probably not as dark as our last record — which dealt with questions of addiction. This one is more about redemption and stepping out of the darkness: it’s more optimistic.

Is this broader view of the world and how it affects you creatively one of the reasons behind joining the MTV EXIT campaign?

For sure, these things are all connected. Human trafficking is one of those issues where we actually all have an impact, yet we might not realise that we do. When you learn that there are kids being forced to work as slaves in sweatshops to produce clothing or shoes or whatever, then in a way we are the perpetrators of this since we are the demand that buys those products. When we first heard about human trafficking and that slavery is still going on in our world, that young women are being forced to be prostitutes or that people are being abused and exploited to produce the goods we buy, this resonated deeply. The deep evil that is present in some human beings – how people could do that to each other. It is shocking. We wanted to take a stand against it: being able to do that by using our music is an amazing privilege.

How has becoming a father changed your view of the world we live in?

It’s made me more fearful to be honest. You realise how vulnerable little human beings can be when they are your own you really want to protect them. When you have somebody in your life that you care about more than yourself it’s a massive shift in perspective in the way that you view the world. You become aware of concerns, which are far less selfish. It does make you want to become involved in the planet that we live on and the society that we live in because you feel somewhat responsible for the world. It’s the world that you are passing on to your children that they have to live in.

What made you decide to join the show at Angkor Wat?

The issue of human trafficking, coupled with the location of the concert itself, made us very excited and very honoured to be asked to participate in this extremely worthy cause. I have been to Angkor Wat before as a tourist and it’s just one of the most breathtaking and unique places I have ever spent time in. It’s also a very spiritual and quite calming place and so to be able to perform in front of it is just amazing. It’s going to be a very beautiful experience. This will be the only gig we do this year and it’ll also be the first gig with our new drummer. So this is going to be a one-off special appearance before our new album is released next year.

What type of show do you plan to bring to Angkor Wat?

What we are trying to do as a band is concoct something very special and unique: a one-off show. A performance we haven’t done in the past that we may not repeat in the future. We are in rehearsals now to deconstruct our songs and tear them to pieces and put them back together in new and novel and unusual ways. We are in a situation we haven’t been in before so it’s very challenging and very stimulating. It’s not going to be a full on rock show with all our amps. I would say it is going to be a semi-acoustic performance: a mixture of acoustic and electric instruments more about melody than bombast.

How can music, in particular, your music and your voice impact this issue?

When it comes to our fan base, I think we speak to people who consider themselves to be outsiders — square pegs in round holes. I think this feeling makes people more sensitive to the idea of social change. However, I don’t know if a lot of our fans and the wider audience of young people are aware of human trafficking. I don’t think they understand that slavery still exists today. I think if we can make them aware that this happens on a daily basis around the world and there are people around the world undergoing these forms of slavery, and if it deeply touches them then I hope they will be inspired to get more involved in trying to change the situation. That’s what we can do as a rock band: Use our voice and our music to spread a message and say that this situation – slavery – it unacceptable, and that we can all do something to fight it. We are not politicians, we are not heads of police. We can just try to change people’s minds and inspire them to act. It might seem that what we’re doing here is a drop in the ocean but every drop helps.

Placebo are currently finishing work on their 6th studio album which was recorded in Toronto, Canada with producer David Bottrill. It is currently being mixed in London with Alan Moulder and is due for release next year when the band will commence a worldwide tour.