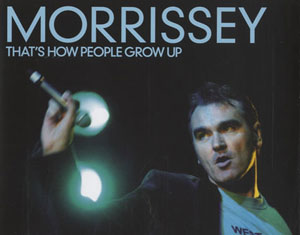 That’s How People Grow Up

That’s How People Grow Up’ is disappointing; it is hard to say why though. As a huge Smiths fan, you would think that Morrissey would still be floating my boat but he doesn’t. In fact, he is no where near. It maybe pointless to say that ‘I don’t like it but I don’t know why’ but it is the truth.

Although it is laced with a gentle, soft Smith-esque vibe, there is no substance. It meaninglessly floats around in your brain like an empty plastic bag discarded on a deserted street. It is bland, average and nothing in comparison to the genius that Morrissey was in The Smiths. Perhaps I shouldn’t be comparing old Mozza to The Smiths, but it is kind of hard not to. ‘Let me live before I die, not me, not I’ sounds as bad as a Coldplay lyric. Sorry Chris, ‘Look at the stars, look how they shine for you’ Martin.

The Smiths didn’t have the most complicated lyrics, but they were bustling with angst and truth. Morrissey seems like he has had a Hollywood make over, he is too rich and too old to put across the same vibe that he used to.

‘That’s How People Grow Up’ is out on the 28th January and will be followed by his Greatest Hits album on 4th February. His Greatest Hits will span his twenty year solo career. Morrissey will be playing live in the UK in January. I have my ticket already. I am hoping that his performance will be better than his new single. It will. I have faith.