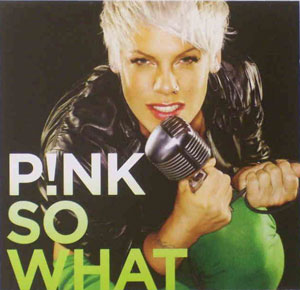 In what is apparently an autobiographical rant Pink attempts to shake off her marital difficulties by declaring that she’s a rock star so she’ll be fine. David Lee Roth coined the term “in the Lear jet without you baby” to describe songs written by stars who are so disconnected from everyday reality that they will happily burble on about the injustices of their unique pampered lives.

Such is this song, the work of someone whose problems cannot possibly resonate with the average human. The global economy is in meltdown, people are being thrown out of their homes and losing their jobs but it’s OK, Pink is still famous so we’re all going to be fine. Anyone who is genuinely interested in the heartache of losing a restaurant table to Jessica Simpson will almost certainly prefer a copy of Heat magazine or an hour in front of E! to this song. It’s not even a particular good track.

In keeping with her recent output, this is a set of song bits stuck together, with no sense that they should belong to the same piece of music – quirky verse part, stomping chorus, provocative line that barely scans. Repeat ad nauseam. Pink’s stock in trade was always self-involvement, but it was the self obsession of someone, anyone, heading out for the night, concealing insecurity with superficial confidence and bluster.

She just doesn’t speak for these people anymore and is way past her sell-by-date. Her continued existence makes me wonder what Sophie B Hawkins is doing. And by the way, never send me a ‘clean’ version of anything. As all grown-ups know, swearing is both big and clever and papers over the cracks nicely.