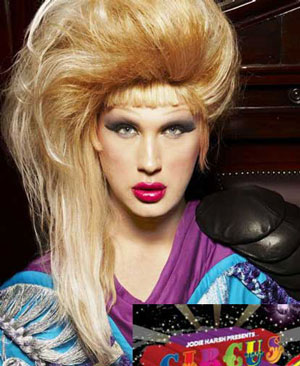 Jodie Harsh presents Circus at The Last Days of Decadence

The world is a circus when you’re Jodie Harsh and after nearly three years at Soho Revue Bar, Jodie has decided to relaunch the Circus in its rightful home – London’s East End.

All of the big-top fixtures that gave the night its notoriety will remain the same. The pole dancers, music, hosts, sideshows and all other extravagant features will get bigger and better, while guest DJs will continue to bring continually new and interesting surprises.

In the past a melee of special guest DJs have appeared including Kissy Sellout, Amy Winehouse, Perez Hilton, Roisin Murphy, Alex Zane, and Daisy Lowe, to name but a few.
Leave your inhibitions at the door and join the Hoxton fashion kids, Champagne socialites, indie boys, dragstars, popstars, supermodels and everything in between. The music is a melting pot heavy on electro yet sprinkled with a touch of indie, pop and hip hop.

Jodie says “I decided to bring Circus to Shoreditch because that’s where the party is. The East End, and in particular The Last Days of Decadence, is a natural fit to entertain such a colourful, vibrant crowd – let’s fucking dance.”