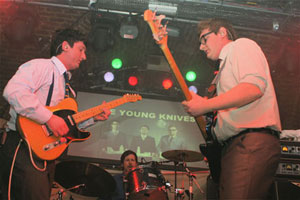 Rage Out In Winter

When I played telephone line tango with The Young Knives drummer Oliver Askew, it was with a specific topic in mind. You see, there’s a new form of gig-going hitting the nation where VIP tickets gets you your own area upstairs, with food and drink; a chance to gig the sophisticated way. Of course, you can throw yourself into the thick of things and bop about downstairs with a less chilled out crew. The Young Knives will headline one such event on the 13th December. Rage Out In Winter is set to be a treat.

I talked to Oliver about the upcoming event, Terra Firma, and exposing English legs to the elements. He’s a nice chap. and The Midlands should make him their official head of tourism. You heard it here first.

Before we get going, is there a question that you wish an interviewer would ask you?

You guys met at school didn’t you? Were you the naughty kids or the angels?

No, we were very good. There were bad kids in our school – I suppose we weren’t good or bad, we just got by. We weren’t part of the cool clan; we just sort of hung out tohether. That is how we got in to a band together. We didn’t like sports and we didn’t get on with the girls; we sort of had a kindred ship so we got together and hung around each others houses. So, we weren’t bad kids at all and we are not a very Rock ‘N’ Roll band either.

Where exactly are you from in the Midlands?

We all went to school in Ashby; the Dartnall brothers are from a place called Belton, which is a couple of miles away from Loughborough.

It’s all quite close down there isn’t it?

Ashby is the place that you would go out in on Friday night; get a very strange collection of people in Ashby on a Friday.

If I was to get down to your end of the world and immerse myself in The Young Knives experience, where should I go and what should I get up to?

You mean in Ashby? Um, let me think. There is a nice market and a couple of good charity shops; better than in Oxford.

What about music wise? Was there a lot of inspiration down there when you were younger?

Not a great deal. The Midlands is very well known for its Rock pub circuit’s bands. So, on a Friday or Saturday night there would be a Rock or Metal band in the corner of a bar – which was awful. In terms of cool music – which we obviously are – there was nothing. There were a couple of bands of a similar age that we would see on the circuit, but we would just generally get out of Ashby and go to Leister.

What is it like being in the band with two brothers? Do you break up the bands or do you cause them?

No, neither! I quite like watching them. There fights are generally about nothing; about being on tour together for too long and living in each others pockets. There is obviously the sibling rivalry but it is just about trivial things. We all try and get on and think abut the bigger picture. In terms of breaking up a fight though – no, I just like to watch them. It never develops into fisticuffs!

Well, you can just call their mum if it gets out of hand! When did you first pick up a set of drum sticks?

Quite late, at about fourteen; before that I was made to play the violin and clarinet and stuff but I sort of rebelled. We bought a battered old drum kit from a family friend. I think I was very late in picking up the sticks but obviously, I am amazing now.

Do you still have that first drum stick?

No, we sold it on to someone else. It was really nice as well, a kind of old jazz kit. It was beautiful. But at that time I didn’t know hat I was doing. I had it srt up all wrong and I was playing it all wrong. I think I must have damaged it a little bit. Me and my brother started drumming at the same time, it was pretty good , we sort of had each other to watch when we were drumming.

Which drummer do you most admire?

Probably someone like Staurt Copeland or the drummer from the Yeah Yeah Yeahs. He does really interesting things; he obviously learnt it Jazz style but then used it to play Rock music. Some things look really good and sound amazing but are not particularly complex. I sort of like drummers that don’t do anything complex but do it in an elegant way.

You made it to where you are now the hard way; you have had a few name changes, management hopping and rehearsing in Town Halls. What has been the hardest thing so far?

I don’t know – it’s not really been hard at all. I suppose sometimes the pressure to write music; that gets a little bit stressful or can be when you are working to a deadline. It’s been great; we gave our jobs up and have just been on the road. I think possibly, when you are on the road for a long time, it gets very difficult.

What’s the worst job you’ve had?

Well, me and Henry worked in a packing factory in Ashby. We were packing mini-cheddars. The smell is horrendous!

You have gigs coming up in France, Germany, and Spain and generally all over the shop. Do you enjoy life on the road?

Yes definitely. If it gets to like, two months, I sort of want to go home and have a day off. The people we work with are all really amazing people. It’s a bit of a party but a party with all the people you love. I can’t wait for Hong Kong.

Do you guys go round in a Young Knives tour bus?

Yeah, if we are doing a small European tour, we go in a little splitter but if we do a UK tour, we go in a bus which is really exciting because you get to lie down and stand up – all the things that you can’t do in van!

What about Australia? Are there any plans to head over to my home land?

Yeah, there was talk of it earlier on in the year but because of our commitments; I think some one said we would hold off. There are people out there who really want us to come and have bought the album. Hopefully in the New Year we will make it – there is nothing stopping us.

You have a special gig coming up on the 13th – The Rage Out In Winter. What can we expect form that one?

We are going to try and make it a little bit special. Obviously, we will be playing songs that people will recognize but we really like our new songs and hopefully everybody else will too. We want to get it out there a little bit. I think there is going to be an amazing light show too, let’s just make stuff up! Stonehenge is going to be lowered on to the stage…

What gives you rage, if anything?

I generally don’t get angry although I did get angry this morning; someone had thrown a stone and broken one of our windows, I briefly saw red and then rang my land lord.

Did you get rage when Terra Firma didn’t make it into the top 40?

Well, we weren’t expecting too much; it was more that the label wanted to get it into the Top 40. Weirdly enough, we have sold more of this single than any others we have done and it has not done as well. It just goes to show the state of the singles market. It is just more about promotion now. We were slightly disappointed though.

Are you a summer or a winter person?

Winter I think; I have more cool clothes to wear in winter. I hate exposing my legs – I’m sure everyone else does too – hates my legs that is.

I have just got a weird games console. I would like some new games for that. There is one where you can be a doctor and operate with a controller. It’s like operation but slightly more graphic.

Do you get enough drum solos?

Um, do I want more? I’m not really a big drum solo fan. But, I like little flourishes here and there. It’s good to see drummers drum along with the other musicians really rather than competing.

What is the best gig you have ever been to as an audience member?

One that springs to mind is the first time we saw the Cold War Kids. This is probably the most recent thing; I’m sure there are others. We saw Cold War Kids at South by South West a few years ago. We didn’t really know who they were and there was no one there. We got really in to them and they influenced us and our writing for a little bit. It’s just the way that they strip it down; it’s almost like tribal rhythm.

The Rage Out in Winter