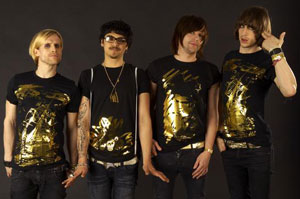 ‘Thrash fashion’ is indeed the best summation for the raucous, wild and devilishly fun performance displayed by Trash Fashion at the Barfly in Camden.

They are undoubtedly one of the most energetically cool bands playing at the moment. With his bowler hat, guyliner, crucifix and skintight, ball crushing jeans, lead singer Jet truly powers his way through an 80’s revival. ‘Rave Dave’ with its synths and crashing guitars was the beginning of a thumping set that maintained its energy until the very end.

By the second song, ‘We Go To War’, a formidable mosh pit had formed and some frenetic dancing was taking place. Jet leapt about on stage, threw himself into the crowd and flashed his underwear-encased behind – much to the crowd’s delight!

Their pounding energy, catchy electro hooks and clever lyrics had the dance floor heaving and had every eye trained on the stage. It was nigh impossible not to dance, with even the coolest of scensters busting a few shapes (as much as the tight constraints of his jeans would allow).

This is a band definitely worth seeing for their stage antics alone. Their charm lies in the fact that they don’t take themselves too seriously, but take performing seriously enough to put on a rollicking show.

I had one of the best nights seeing these guys perform – and would spread the word to see them any chance you get as you’ll be in for a wild night of guaranteed fun.

NIGHTS OF ERROR album is out now.