In a political and social climate that instigates varying, majorly negative sentiments at a daily rate, finding a mode to articulate simultaneous anger, disappointment, and consequential gratitude for existing comforts is a formidable feat. Enter EE Beyond, the Los Angeles-based soul and R&B singer/songwriter whose sonic influences stem from Lauryn Hill and Erykah Badu, and whose lyrical inspirations arise from the fictions she and her peers have been told. Oscillating from a voice that is soft and gentle to one that can be sharp and biting, Elaine Faye, the brainchild behind the project, tackles her frustrations over personal and national circumstances with an admirably controlled urgency. 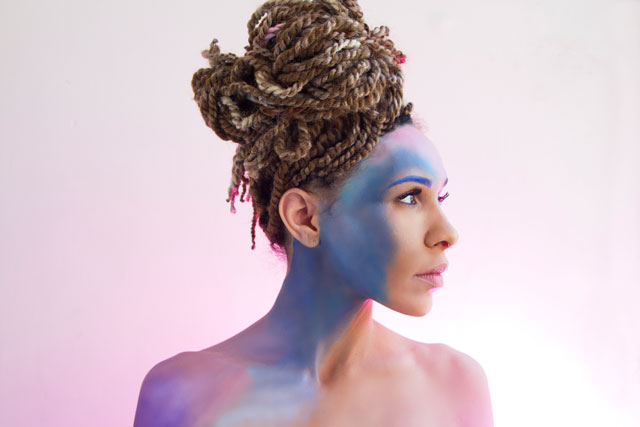 EE Beyond’s debut EP, Watercolor Lies, shares the stories of the “pretty lies” of Faye’s life–as a woman, as a person of color, as an American, as a dreamer. “It’s a collection of a few different stories that are all based around lies that you’ve let yourself experience or expected yourself to have at any point in time,” Faye says. With aide from producer Solomusiq, né Malachi Clark, a fellow alumnus from Faye’s alma mater, the Musicians Institute, EE Beyond takes Elaine Faye’s soul band origins (she previously performed in L.A.-based weareTheBigBang) and expands them through hip-hop production and the occasional trap beat.

Home studio-recorded, Watercolor Lies begins with a community, homebase perspective on “Dreamers Howl,” produced by Dane Diamond. “[The song is] about experiencing frustrations as a minority…the idea of growing up having dreams and growing up thinking that there was a way to get out of a situation, and a lot of times for people of color living in impoverished areas, that’s just a really difficult possibility,” says Faye, who is originally from Port Orchard, Washington, and moved to Chicago as a teenager. “When we’re experiencing it together, you realize that what I’m experiencing, you’re experiencing, too. It sucks, but at the end of the day, we’re not gonna let it be the final blow to us, let it be the final say in our story.” Above syncopated claps and an acoustic guitar strum are layered vocal harmonies, emulating what sounds like a tribal chant. The refrain of “I’ve got you” conveys EE Beyond’s communal experience of feeling lied to, but overcoming it as a unified group.

On Watercolor Lies’ title track, EE Beyond sheds light on a lie that rarely receives musical attention and treatment. Like many other young working people in the United States who graduated from college at the time of the recession, Faye found herself frustrated with a lack of job opportunities, despite pursuing everything she had been instructed to do to achieve success. “You’re taught about the American dream and you’re taught that anybody can change your circumstances and make things different with hard work and education,” she says. “It’s kind of like the American dream has changed.” “Is this how it’s gonna be the rest of our lives? / Working three jobs just trying to survive?” EE Beyond asks in the track, later accompanied by a staccato flute. “It’s almost like you’re running in one of those hamster wheels,” she says.

EE Beyond confronts different kinds of lies on relationship-based tracks “Too High (The Story of Us)” and “Enemy,” the EP’s final track. The former uncovers lies the media provides audiences with about love. Having grown up in a broken home–Faye’s father went to prison when she was seven years old; her mother passed away when she was fourteen– Faye recalls never receiving a proper “talk” about navigating relationships. “It’s not what you see in Disney movies growing up. It kind of becomes a bit of an expectation given a lot of the things that we see and experience on TV, especially as a young woman,” she says. On “Enemy,” a climactic piano ballad, Faye considers the lies she’s told herself to stay in a relationship. Deep bass and piano chords accompany her profession, “I’m my own worst enemy/ Can’t you see? / I can’t control myself/ You’ll be the death of me.” “You’re allowing yourself to be in a situation that you know you shouldn’t be in, that you know is not good for you,” Faye says about the track’s meaning. “You want that feeling of love; you want that feeling of something more than what you have. You are creating your own false narrative in order to deal with the effects and the consequences of allowing someone else to use you.”

These false lies and social ironies are what EE Beyond questions and confronts throughout Watercolor Lies. As the artist prepares for the EP’s release and tour, she hopes that listeners will not feel down about the content of her new tracks. “The EP is rather dark, but I don’t think it’s dark, necessarily, in a depressing way,” she says. “I think it’s a state of mind I was just trying to explore…Why are things like this and how did it get here?” Watercolor Lies is a body of music that exposes the lies EE Beyond has realized over time, but its mission is perhaps an optimistic one–not as much an exposure of lies, but a quest for truth.

More on EE Beyond: