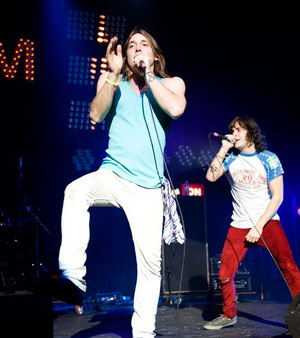 Back in the early nineties I watched a mini-festival in London organised by a radio station that barely existed. It featured the royalty of indie at the time, even The Cure headlined, probably because they were the station’s major backers at the time. The show was felt to be important because there was a campaigning element to the day. It’s easy to forget that back then there was only one national radio station playing contemporary music and one show on national radio that played indie / alternative music. No internet, no DAB, even 24 hour pop and rock on FM was a relatively new innovation. Hearing the music you were into, for the indie kids, ravers and Goths was a tricky business and this station without a home promised so much.

It would be another four years before Xfm got a permanent licence in London and nearly two decades later I find myself surrounded by the latest crop of 14 year olds waiting for their latest live celebration. Much has happened in the meantime. The station is a fixture, a vaguely national entity and indie / alternative has never been more mainstream. Like Great Expectations in Finsbury Park ‘93, some of these bands will vanish into the mists of time. The Frank and Walters anyone? No, thought not. The headliners are already huge, big in a way that means we will certainly remember them in 20 years time, but who will be with them?

This gig kicks off at 6.15pm on a Tuesday night. Most people are still at work but the kids, and by that I mean children as opposed to ‘the Kids’, are all out of school. As a result the only people watching White Lies are not drinking because they can’t get served or because they’re driving them home.

Given the early start and the usual ticket shenanigans, I miss most of their set. However I witness enough to see that like a lot of bands at the moment White Lies want to be The Editors or Keane via Snow Patrol. I’m sure they’d rather I said Echo and the Bunnymen or Joy Division but really they’re not on that level. There’s a brief thrill of the proverbial sonic cathedral but we’ve heard this before. Maybe I missed the song that will pull them above the throng but I very much doubt it.

I watch Jo Good bounce on stage in lycra leggings and sparkly dress to describe Ladyhawke as ‘Girl Power’ before giving them the worst introduction possible. The curtain rises to find the band, and apparently the sound engineer, totally unprepared.

I won’t discuss ‘Paris is Burning’, tonight’s closer, as I have reviewed it already and slagged it off: I direct the Right Honourable gentleman to my previous answer. I’ll also ignore the first song whose tedious three chord trick was taken from the song every 14 year old writes when they gets his first guitar. It could be brilliant but it’s lost in the appalling sound. I therefore base my review on the remainder of the set.

Pip Brown, AKA Ladyhawke, has Asperger’s Syndrome and I wonder if this explains her lack of visible emotion or did someone tell her to act disinterested because it’s supposedly cool? Either way it’s at odds with her ‘80s retro cheese pop. I would have thought that it would required a more enthusiastic performance to work properly. She looks too earnest, too serious by half.

I warm to her frigidity eventually, like watching Kim Wilde on ketamine. Sounding like the soundtrack to Miami Vice seems a very strange thing to want but for someone named after a very average ‘80s movie it shouldn’t surprise. Maybe I miss some subtlety in the still half empty venue, maybe she needs to loosen up. I have been mistaken about this kind of thing before, I was wrong about the Ting Tings for example, but I’m not wrong that often.

Bizarre personal issues that required me to leave and then come back again meant I miss Ida Maria, her Bjorkish tonality, top hat and drum solos. Listening on the radio as I queued to get back into the building I am struck by how much more interested she sounds than anyone I’ve seen so far. This gets blown out of the water by the next act, Americans Iglu and Hartley.

They look shambolic in their tracksuit bottoms and leggings, shocking curls and greasy metal hair. However they are also hugely charismatic in their sheer ugliness, the sexual allure of all the naked flesh apparent from the girlish howls of the audience. They look ridiculous but their sense of joy and vibrancy, not to mention their complete lack of concern for their dignity, has a special power. Somewhere between the Sugarhill Gang and Van Halen, their effortlessly anthemic hip-hop metal recalled the Bloodhound Gang but I couldn’t quite put my finger on exactly who they sounded like until Xfm’s Marsha played Huey Lewis afterwards. I wonder if they aren’t too kooky for the image obsessed British because that could be the only thing standing in their way. However, everyone seems to know In This City already, as the crowd sing every word so success clearly awaits.

I stand back a second to take in this little snapshot of Indie 2008. Stuck in the gallery I’m surrounded by the children but to me that’s always been where the spirit lies. People too young to know the difference between Oasis and the Beatles, for whom everything is fresh and unsullied, for whom the world is an oyster, only with wi-fi.

The Eighties is clearly in. For a group of people for whom John Hughes means Home Alone rather than Pretty in Pink, the ‘Kids’ are loving things that sound like US MOR and Pat Benatar. They’re also looking more and more like they go the club that the Terminator crashes into looking for Sarah Connor.

I’m disturbed that many of the girls resemble Peaches Geldof, or rather she looks like them. Ludicrous oversized handbags held like they’re a toddler with their mum’s accessories, walking on tippy toes in impractical heels like some weird parody of womanhood. Their make-up removes any definition from their face and their eyes are done up to resemble Droopy’s permanent hang-dog expression. Yuk. When did Indie kids get so vain, so Grazia? It’s like Paris Hilton was mated with a goth. I definitely preferred the day-glo painted new ravers, at least they looked interested in things. I watch the 12 year old boys watching the fourteen year old girls, with whom they have no chance, and I feel for them.

Talking of fashion victims, The Rifles flounce onto the stage after 9 o’clock to play their slightly dull bloke-indie, hung on a series of one hook pop songs. It’s vaguely catchy in a repetitive kind of way, specialising in the great Rock & Roll tradition of being snide about women. It recalls the Housemartins without the harmonies or political awareness but it amounts to little more than C86 jingle-jangle through a Marshal stack.

It also shows all the signs of some serious contrivance. You may believe there’s some inherent Yorkshire sound, but following Occam’s Razor, that the most obvious solution is usually the right one, it’s more likely that the band changed style to sound like the Arctic Monkeys than anything else. The difference in the singer’s voice between July 2005 and October that year with the arrival of …look Good on the Dancefloor seems to bear this out. One minute he’s Morrissey the next he’s Alex Turner. It barely matters, it’s so very, very ordinary. I’m most offended by the guitar break from Local Boy which is shamelessly ripped off of The Cure’s Just Like Heaven but my derision dissolves as they launch into an indie-pop version of Sleigh Ride. Such self effacement should be encouraged and they leave me with a smile.

Just before the headliners come on, I hear someone in the toilets say, “isn’t it great to see them in a small room?” That’s the reality of the Kaiser Chiefs these days: Brixton Academy is too small for them. For a lesser band tonight might be some kind of apotheosis, vociferous partisan support, big exposure, live on the radio. I can’t help thinking that for the Kaisers it’s just another performance, another personal appearance. It’s another indicator of the time that has passed that they walk on to Dire Straits’ Money for Nothing. All very ironic but it would have brought boos and catcalls in ’93.

For all their bad rhymes, awkward scanning and occasional lapse into tedious cliché, you can’t fault the performance or the functionality of their brilliance. Formulaic as it may be, their songwriting provides every element necessary for exhilaration and recall, hitting each target and moving on before you can get tired of it. They now have a set full of hits and their eventual destiny, as gods or also-rans, is in their hands.

Rising effortlessly to the demands and scale of their fame they are unquestionably rock stars, with all the baggage, positive and negative that comes with it. To paraphrase PG Woodhouse, I can’t really approve of their methods, but I have to admire the results.