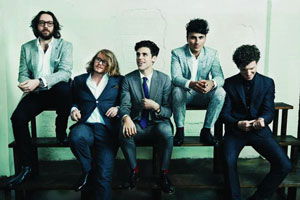 If this really was the last party you went to before the world ended, you may have felt a bit cheated with the execution. As one of several parties in London celebrating what may well have been the obliteration of Earth during the Cold War, 93 Feet East in trendy Brick Lane had certainly set its stall out. Promising novelty acts, fancy-dress, Russian spies and “songs to dance your last dance to”, it was no wonder the small club was heaving by half nine.

Fancy-dress was largely adhered to which was good to see with the stylings of Pat Sharpe, Kate Bush, Nena, Sid Vicious, Debbie Harry, George Michael, Adam Ant and Annie Lennox wandering around the illuminated 80s dance floor. Luminous dresses, sweatbands, spandex, leather and one Russian Soviet cap were also welcome additions to the assembled ensemble. The venue boasted an outside area, a well-lit reception hall and a well-populated dance arena full of podiums on which to dance away your last night on the planet.

Prominently featured in both rooms was the inevitable Countdown clock, counting down to midnight if rather unspectacularly. Of course with both USA and Russia probably not running on G.M.T. back in the days of nuclear battle it may not have been a very accurate portrayal of Armageddon but the flaw was to be overlooked. Sadly unless time-machines were in fashion in ’86, an anachronism came when a rather familiar voice blasted out of the speakers: “Yes. history in the making, it’s so crazy right now.” Indeed it would have been- Jay-Z and Beyonce Knowles making their pop debuts as the Cold War looms. Sadly there were several examples of that and considering the amount of music to select, it was disappointing and detrimental to the theme.

Those lucky enough to be deemed as ‘dancing like their lives depended on it’ were snapped busting their moves by the house photographers- fully kitted out in nuclear boiler suits (a nice touch) and bar staff were mostly styled for the event. I dressed up as Tony Montana and the over-bearing security responded by being efficient (if a little too over-the-top). One speculated that he was confident of “finding something” and as tempting as it was to mention ‘my little friend’, in hindsight I’m sure it wasn’t worth it.

The final countdown was quite an anti-climax, “We survived!” exclaimed the DJ before continuing with the tunes, and that was it. Some stayed; some probably didn’t know where they were and most clambered over the cesspit of plastic cups, glass bottles and debris no doubt thanking their lucky stars. The ambience was good, the organization disappointing but in general leaving you with that feeling that you’ve had better nights out than this.