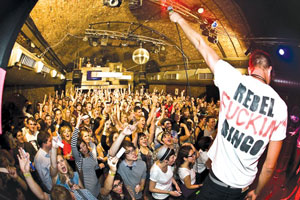 Going to Underground Rebel Bingo was a little bit like going to a church fundraiser in the local village hall, except with lots of professional twenty and thirty somethings and jokes about your grandmother’s hymen. It may not seem like most people’s dream night out, but it’s actually a lot more fun than you’d think.

The night certainly wasn’t about the prizes, which were mostly various kinds of gadgetry – all well and good, but those who’d hoped that forking out the fifteen or so quid entry fee would result in a big payout would have been disappointed. The real entertainment was host Paul and his Bingo Bints. You can’t get much better than retro fancy dress number callers with catchphrases that were slightly more… risqué than normal. You don’t hear ‘Come on my tits it’s 66′ at your local Gala bingo (not one that I’ve been to anyway). Some of their banter fell a bit flat in places, but on the most part they were funny, quick, clever and dedicated to maintaining the charade of illicit underground bingo taking place under the cover of a church AGM.

Would I want to go to Rebel Bingo every week? No. But it did provide a fun background to my usual Friday night drinking session, and it was definitely a novel way to unwind after a long week. I have to say, the real highlight for me was Craig the Hula Boy during a gap in the bingo. A short chubby guy dressed as Elvis and doing the hula hoop may sound like some sort of horrific Britain’s Got Talent moment, but believe me when I say he was incredible. Judging by the riotous applause he received, I wasn’y the only one who thought so. For that alone, Rebel Bingo was one of the best nights out I’ve had in awhile. Go on, be a Rebel next Friday.