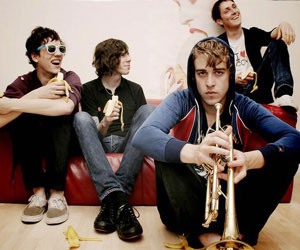 A song comes on the radio, it goes: ‘bla bla bla.’ Throw in a s*** guitar solo and a skinny-jeaned clad vocalist and you pretty much have your average Indie band that, unfortunately, makes up a huge chunk of today’s music industry.

Then there are the Lovvers (note – not The Lovvers, already putting a strike against the Indie uniform check box number one) who seem to have appeared from no where, unknowingly subverting the depths of musical consciousness. Scratchy and unrefined, the Lovvers are invigorating in their obscure sound, electric live and quite frankly, a f*** of a lot better than anything else at the moment.

Your music is pretty chaotic – I’m not sure if you are going to like this comparison, but you are reminiscent of The Libertines; do the Lovvers have an equivalent of the Albion Dream?

How did you feel about my comparison between Lovvers and The Libertines?

I don’t know; probably better than the other guys would have felt. I liked The Libertines anyway. I see where you are coming from; if you look at them early on…if Pete Docherty didn’t behave the way he did people wouldn’t mind so much. They did used to play a lot of different types of gigs and let their fans come in and go pretty crazy, playing house parties, so yeah; I can go along with that. I think their ethos is a bit different to ours though.

So what is the ethos of the Lovvers?

We are partly born out of just wanting to be in a band without having to have a job and partly from a reaction to the disappointing fruits of the UK music scene over the last two years. There just hasn’t been anything that has inspired us that much. There has been some good music but not as much as we hoped. On that basis, our ethos is to work hard and put our all into it whether there are four people at a gig or four hundred and to make the records that you want to make.

Your sound is refreshing. You’ve literally exerted life into a rather dull stream of same-sounding bands. Are there any contemporary bands that excite you?

Yes, definitely, loads. In the UK, my favourite bands are The Demons, who are really awesome and The Sceptres, a Brighton band. In America there are a lot of bands that I like, and a band called Wavves, who have two vs like our name. Also, obviously I like bands like Mika Miko, No Age…

What is it that matters to you; playing live, selling albums, recording, instigating a new musical…

Ha ha, no not that I don’t think.  It’s probably just being four people in a band and doing our own stuff. It’s not just about playing gigs or putting out records. I think there are some bands that are good live and have a good attitude but don’t necessarily have good songs. If I was playing hundreds of shows but the songs weren’t up to much then I would just be really disappointed. Personally, on the record that we made, I am really pleased with all the songs. They all have Pop hooks, good vocals and good lyrics.

Your new LP ‘Think’ is out now.

Yes, it officially came out on Monday.

Ha. Well, I think Sean, the singer, wrote the press release tongue-in-cheek; ‘it’s just long enough to quit your job and tell your mum to f** off.’ I might have made that bit up. It’s also long enough to throw out all the s*** records that you have been told to buy over the years.

Which song means most to you on the LP?

The first one, Human Hair; it is the only one that I wrote from scratch.

Is it the best to play live?

Yeah, that one and The Kids because it is fast and then slows down.

You have a load of tour dates coming up from Milan to Liverpool. Which city are you looking forward to most?

What does a Lovvers’ live experience entail?

Well, anything from a bemused bunch of people standing around while we go mental or a few people grabbing the mic and singing covers of The Kinks while we smile on. There is also a bit of crowd surfing…whatever really.