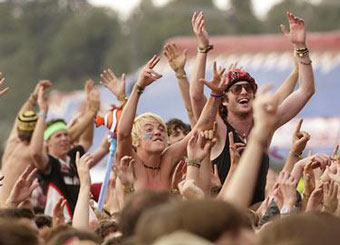 The Reading festival of 2008 did not see many early birds as campers as the volume of early arrivals was lower.However, by the end of the festival, 80,000 or more had let the musical event and its festivities rejuvenate the cores of their being. The imperfections of shabbily pitched tents did not take away from the ambience of The Reading Festival of 2008.The toilets were better. Music lovers had come from all over to connect with others and become a part of the unique experience.

The headliners were “Race against the Machine”, “The Killers” and “Metallica” and they brought their messages in lyrics and music with indie, rock and metal. The crowd went wild and pulsated with the loud beat. The beer helped and the passionate frenzy of the crowd found its way once again in the hearts and coursed through the veins of the crowd.

Six different stages had been set up for the performances, but the stages themselves were just platforms for expression. It was the actual expression of music and the charisma of the musicians that the crowd either worshipped and moved with or rejected with “boos” and the throwing of bottles! The crowds, hungry for rock, let their displeasure be known to Plain White T’s. More than a hundred bands played and were put to the test. The verdict was given by the listeners.

Slipknot and The Avenged cancelled at the last minute and The Cribs and Babyshambles were the substitutes with the onerous task of displaying their talents as heavy metal headliners. They played to move the crowd and the crowd “moved”! The euphoria of those “moved” was unmistakable!

The performance of Tenacious D was immaculate but not spectacular. Despite the perfection, it was not able to bring the crowd to its feet. The popular experimental music of Crystal Castles became even more popular with the more than 80,000 attendees.

The 2008 Reading Festival lived up to the historical reputation of this event. The musical repertoire, the buildup of excitement from right when tickets hit the vendors until the Sunday the event starts folding up relived their phases of expression, planning and frenzy. A car park fire, spiraling smoke from campfires was just the expected and memories were relived once again during the three day weekend. The sludge and the rowdy disorder of the crowd were simple reminders of years past. Once again loud acoustics won applause while the tamer versions of bands were “booed” and made to feel unwelcome in passionate tones. While the nights brought out the fervor, frenzy and disagreements, the days were filled with hushed disco music, the ambience of a huge fair and some minor shopping. The festival, as in other years, drew the “young at heart” and made a body of over 80,000 people “one”.

The 2008 festival once again met high expectations and during the following week, the nostalgia had already set in. The crowd was already looking forward to the bank holiday in August of 2009.