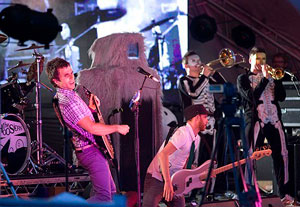 People take the p*** out of The Hoosiers; a lot. But, when they covered Billy Joel’s ‘We Didn’t Start The Fire’ ahead of the burning of the boat at 2008’s Secret Garden Party festival, they did so impressively. In between singing about Mr A and a geezer called Ray, they seem to cover anything that moves; Justin Timberlake included. We caught up with Lead singer Irwin recently for a bit of keyboard ear-bashing.

Being invited to perform in the Radio 1 Live Lounge is a pretty big
deal, how did you feel when you were asked to play?

It’s another pinch-me moment. Amazement quickly gives way to nausea as you realise you’re on tour and have 3 days to sort out a cover before the Great British public find you out as being an absolute musical chancer … or not. Therein lies the challenge!

What inspired you to cover Justin Timberlake?

The chance to do a song very unlike our own style and to also change it into something very different and leave our mark on it.

What is it about playing other peoples songs that makes it so enjoyable?

You can leave all insecurities about your own music behind and just enjoy playing it and having fun with it; messing with the structure and arrangement.

You sound like you had a lot of fun, what was the atmosphere like during
the session?

Tense in places. We had a string quartet to orchestrate. Thankfully our beloved keyboardist Sam sorted them out, but there’s a lot more bodies than usual with 10 musicians in the room.

Is it strange performing to the nation from the confines of a small studio? It must be very different to performing in to a packed crowd at a gig.

It is a little sterile. Odd to think although there’s little evidence of an audience there’s a bigger crowd than you’ll ever get to play in front of at any live-gig.

What’s the strangest thing you’ve ever asked for on your rider?

Apart from ‘Love stoned’ that you performed in the Live Lounge do you have any other great cover songs in your arsenal?

Our Billy Joel’s “We Didn’t Start the Fire”, We Are Scientists’ “It’s a Hit” and Robyn’s “Heart Beat” boast a ferocity uncapturable by prose.

What is your favourite cover version of all time? (why?)

What would your dream Live Lounge cover be? Imagine you could choose a band or artist and the track they’re covering?

Radiohead doing A day in the life.

Who would you like to see cover one of your tracks in the Live Lounge?

What are you listening to at the moment?