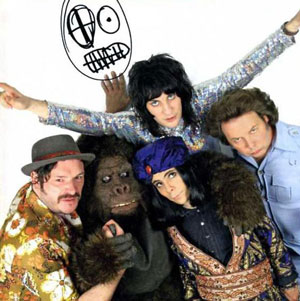 Q + A with The Mighty Boosh

To celebrate the DVD release of series three of The Mighty Boosh, the Boosh and friends kindly put on free screening of their favourite series three episodes at the Institiute of Contemporary Arts .

They took to the stage afterwards for a Question and Answer session, allowing obsessed Boosh fans to glimpse a little further into the glittering and fantastical world of The Mighty Boosh.

Not only did we get to see Noel Fielding (Vince Noir) and Julian Barrett(Howard Moon), we were also graced with the pleasure of being joined by Mike Fielding (Naboo), Dave Brown (Bollo) and the hilarious Rich Fulcher (Bob Fossil).

After an initial interview with an ICA member, fans were given the chance to quiz the Boosh.

What followed went by in a blur of laughter, random outbursts by a slightly crazed Rich Fulcher, and general Boosh tainted mayhem.

I want to know about your first meeting. Now, clearly two of you are brothers…

NF: Yeah, we met when we were quite young.

When was the actual day that you two met?

NF: When was the first time we met?

NF: Was it in High Wycombe? We met at the Hell Fire Club, Julian had been on – the act was great and then we met him. We were going to watch this act and Julian sat down and said ‘yeah, yeah, I want to watch him,’ then after about five seconds he said, ‘yeah, I’m going to go.’ We were like oh, he is very funny but clearly mental.

Was it professional love at first sight?

NF: The first thing that you ever said to me was ‘is your hair on backwards?’

JB: Yeah, at your stand up I didn’t know if you were a character or not, if you were just being yourself.

How long was it before you decided that you would work together?

JB: We did a gig together at the Enterprise in Chalk Farm,.

(NF burst out into laughter. A voice bellows through the cinema. Rich Fulcher strides through the back entrance and makes his way to the stage)

RF: Why are you guys such…. (gets lost in the cheering. He greets his fellow Boosh friends and then gets to the interviewer)

Who are you? Were you playing me?’

I’m going to ask Rich if he remembers seeing you two for the first time.

RF: Ohhhhhhhhhh. There is a show called Asylum. Has anybody seen it? It’s great.

NF: I wouldn’t go that far.

RF: Julian is there and…

NF: This is a boring story.

RF: And we were shooting crack up out testicles. I met Noel through Julian because they were inseparable.

NF: Through him? You pulled me through him.

RF: He was a hollygram.

NF: You better go out and come in again.

Are we wrong to think of you as a kind of surrogate couple?

He’s the other woman. The two of you obviously have an amazing chemistry together and it is tempting, on the outside, to see you as a surrogate couple. Not necessarily in a touchy kind of way.

NF: Not in a bumming kind of way.

Exactly what kind of couple are you then?

(Some idle chatter takes place, talking of the couples they could be)

NF: We haven’t answered one question yet.

NF: I am clearly. I’m the woman and Julian is the man. We never really had to work on the chemistry though; it was just there. Once, we were in my house in Hackney, we pulled the curtains down and made some costumes out of them…

JB: We used the shower heads too…

NF: Julian was writing a song and I was doing a poem. I thought, this is sort of comedy – but not. Not comedy that anyone recognizes at all. Then we played in this pub and it was full of quiet but laddy city workers who were like ‘that’s a bit f****** surreal for me mate but I’ll go with it.’ It was a bit weird because there were loads of stand ups then we came in and put potted plants everywhere.

(Noel carries on and is interrupted by Rich Fulcher burping loudly)

When you did the TV pilot, you had an audience tracking, which turned out to not be the right thing. Did someone suggest that you should do it that way?

NF: Yeah, everyone. They were like ‘you’ve got to have an audience, you’ve go to have an audience.’ When the audience came, they laughed a lot, at too much, at nothing. Afterwards, the people that were there said ‘cor, that laughter tracks a bit much.’ We were like, that’s you, you idiot, ruining our show. So we decided…

RF: You’re not paid to talk. Wait, neither are we.

RF: No, but everybody thought that…like you said, that, um. No, but you never know what…(drowned out by laughter.)

RF: No, but you don’t know until you do it, right?

JB: Half the pilot was shot with an audience and half of it wasn’t.

I think you made the right decision.

JB: I want to do a drama with an audience; one that is about suicide.

NF: It makes it more personal without an audience; it makes it feel like it is for you. You can hear my mum in the pilot laughing like the female Syd James. ‘Aaaaaaaaahhhhhhhhhh, that’s my boy. Ahhhhhhhhaaaaaaaaaa. He’s on telly.’ It was really embarrassing.

Were you on the pilot?

RF: No, I was just smoking.

I was talking shit to the audience before you came on. We agreed that we didn’t want you to get anymore famous. It’s interesting because you just spent hours in the morning at HMV…

RF: Yeah, why didn’t you tell me about that?

No-one told you about this but you still came.

NF: That happens a lot. People say ‘I hope you don’t get any bigger.’ I think, well, I do need to pay my bills.

Do you want to do Wembley arena?

NF: We are doing Wembley Arena.

Do you want to do it or are you being kind of nudged into doing it?

NF: Well, I would quite like to do it, yeah.

Just to say you’ve done it?

NF: It will be a good experience.

Audience member: What is the difference between doing big places and doing a smaller place like…

JB: Sorry, we haven’t got to the floor yet.

Don’t forget, these people own you!

This is a pretty good question actually, I ask everyone.

RF: What, on the street?

If you had to liken yourself to an album, which album would it be?

NF: I think I am probably more Milli Vanilli.

DB: Well, I could say the Monkeys…(pulls face to a an ooohing crowd.)

RF: Basically anything by Celine Dion. What would your album be?

RF: I was going to say Thriller!

DB: No you weren’t so stop lying to yourself.

One Boosh member to the question asker – ‘Are you a zombie then?’ (Pause)‘Are you a paedophile?’

(The audeince are crippled with shocked laughter.)

Have you still got plans to do a film?

NF: The film question. Yeah, we had a meeting the other day and that is the plan. We would love to do a film. That was one of the first things that we really wanted to do. Then we realized that you can’t just make a film when no-one knows you.

JB: We try to make our TV show a bit like a film.

We did a similar thing like this with Spaced and they said there is no point in making a film.

RF: Oh, those guys should shut up.

Would you rather have been in a successful band than a comedy act?

NF: No, I don’t think so. I have a lot of friends in bands and they always say, oh, you don’t want to be in a band! It is fun playing in a band but I don’t know, we get to do everything on the Boosh; music, animation…

RF: Yeah, it’s very eclectic. Why did you ask that question?

Well, there is so much great music and the hair and everything! It looks like you’d really like to be in a band.

NF: I think when you make people laugh it feels really good. I think it has always been comedy for me, even though I dress like I am in a band. Although, actually, when I was in my mate’s band, it was the most fun that I have had in ages. You don’t have to do anything, people just come out and scream at you!

RF: You have to actually play though

‘You’re not plugged in mate.’

Have you got any thoughts for another series?

NF: We don’t know yet, we have the tour and the film so…we would like to though. It was a quick decision; do you want to do another series or do a film? FILM.

What are you favourite characters?

MF: I like the hitcher…I have to say my brother.

DB to RF: Say mine and I will say yours.

NF: I haven’t finished yet. You keep jumping the queue.

NF: I like Naan bread a s well. When we were on tour, someone came as Naan bread. I just looked a t him and lost it. He was just sitting there…

Where did the radio fit in?

NF: Couldn’t get a telly show.

NF: You were at school weren’t you? I don’t know, where were you? Radio was good fun though. We would be on before or after the football and Lofty from Eastenders was doing it. He would start off like, ‘the crazy Boosh’ and by the end, he would be saying ‘I don’t even f***** understand what’s going on. It’s not funny, what is it?’

What is it? Who knows? Who cares? There is no need to put the Boosh in a box is there? It’s funny and we love it.

The Mighty Boosh Series Three is in shops now!