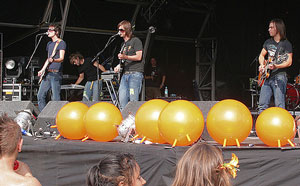 Interview with Steve Waterhouse of The Nova Saints

Once upon a time, there was a group of lads men in Bristol. Boredom and a talent for all things insrtumental led these men down a path of (and I quote their press release) ‘spaced out Rock’n’Roll, psych-tinged Pop, anthemic choruses and west coast harmonies’. We call this “damn fine music”. They call it “The Nova Saints”.

I stole lead singer Steve Waterhouse away from the mic for a quick chat about their grass roots, life under the same roof and the road ahead.

You’re originally from Hereford… I’ve never been there (though I know it’s a breed of cow). Is it a small place?

It’s a breed of bull! Yeah, it’s quite rural.

How did you get from Hereford to Bristol.

Hereford’s quite small so it kind of came from finishing school/college and sitting around without an awful lot to do. So we formed a band. Opportunities were quite limited in Hereford and we’d all been down to Bristol a few times to see gigs and what have you… we really enjoyed it and decided to move here a couple of years ago. It’s been going pretty well since.

The music scene is, yeah… it’s really diverse. There’s something for everyone – I mean obviously, we’re a sort of ‘white boy Indie guitar band’ which there are a good few of in the town but Bristol is most famous for the last ten years of Trip-Hop type stuff so there’s all of that as well. It’s really diverse – I think something pretty big is going to happen soon in Bristol; hopefully us.

Tell me about the other band members…

There’s John who is the bass player – he’s the big tall guy usually to my right on the stage. John and I have been best mates for years and have lived together for as long as I can remember. Dominic is the guitarist, Tom plays drums and Matthew is on keyboard and samples. He’s the one who makes all the stupid noises when we’re playing.

You now live together in Bristol right? All in one house… is it always amicable?

Yeah – most of the time it is. We were best mates before we formed the band so we give each other space and know what pisses each other off, and what makes each other laugh. We get a good balance between spending enough time and giving each other a bit of room as well.

It must help on stage…

Absolutely… we kind of know what each other is thinking. It helps to give each other a bit of space when they need it and what have you.

Does anyone have any bad habits?

Laughs – yes! I’m not telling you those though. They’re not just bad – they’re really bad.

Who’s the most domestic?

Hmm, I want to say me but probably Dominic.

Let’s talk music… where do you want to be in a year’s time?

With their impressive live reputation “a lot of noise but quite atmospheric… not too loud” and support from the likes of The Verve’s Nick McCabe, The Nova Saints are set for big things. McCabe chose the guys to appear at Bristol’s Ashton Court festival to mark his return to the live scene. Despite no aversions to the prospect of life in the limelight (and the cash that comes with it), Steve’s spoken demeanour is quiet. On stage this is a man that comes alive. The band members obviously take their music seriously – and expect the same in return. Respect in this case, is most certainly due. Hereford has produced some top talent. No bull.

The Nova Saints recently recorded a track to be included on Northern Star Records’ ‘Psychedelica Volume 2’ compilation. Check out their site to hear ‘The Draft’ from their new EP.