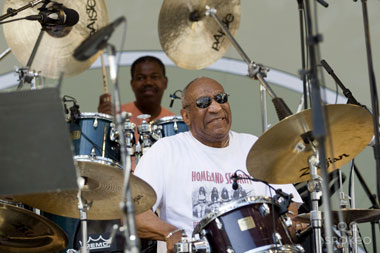 The lineup for the 32nd annual Playboy Jazz Festival was announced at a Feb. 25 press conference held at Hugh Hefner’s Playboy Mansion. Comedian/actor/activist Bill Cosby will once again preside over the event, set to take place at the Hollywood Bowl in Los Angeles June 12-13. Billboard.com quoted the showbiz veteran as saying this about the cherished music festival: “The music may be eclectic, but it’s never boring. It’s still the best ticket in town.” With a lineup featuring headliners the Chick Corea Freedom Band and George Benson and the Manhattan Transfer, Cosby is right!

Acts making their Playboy Jazz Fest debut at the 2010 edition of the festival include vocalist Kurt Elling, Sax For Stax (Gerald Albright, Kirk Whalum and Jeff Lorber), “Trombone Shorty” Andrews and Tiempo Libre, while those returning to the fest include Robert Randolph and the Family Band, Esperanza Spalding, Marcus Miller and Cuban dance orchestra Los Van Van (appearing after a 10-year hiatus!).

President of festival producer FestivalWest Inc. Darlene Chan said at the press conference, “You can’t say we do the same old, same old. We’re both inside and outside the box.” Even Hefner (executive producer of Playboy Jazz Festival) weighed in, adding, “It’s a party with the greatest ambiance and sound. Given the downturn in the economy and the music business, this music always brings something to the heart and lifts spirits.”

Although Playboy Jazz Festival’s master of ceremonies Bill Cosby is now a household name, he was just another stand-up comedian when he emerged back in the 1960s. The product of a Philadelphia housing project, Cosby quickly became a popular live draw and eventually released a string of live comedy albums. Eight of Cosby’s comedy albums went gold and five went platinum, while he also took home five Grammys for his recordings!

After securing success in the standup realm, Cosby decided to conquer television and became the first African American to co-star in a dramatic series when he landed on the television show I Spy. In the 1980s, Cosby was given his own sitcom called The Cosby Show. The iconic sitcom was credited with rescuing NBC from floundering ratings and also highlighted a new era in the family sitcom format. After his eponymous show went off the air, Cosby continued to test his acting chops with film roles (such as in the hit flick Uptown Saturday Night) and also penned a handful of best-sellers (like Fatherhood).

Most recently, Cosby released Bill Cosby Presents the Cosnarati: State of Emergency in October 2009. Billboard.com reported that the album serves as the “aural companion” to Cosby’s 2007 bookCome on People, which he co-wrote with Dr. Alvin F. Poussaint. Bill Cosby Presents the Cosnarati: State of Emergency doesn’t feature Cosby himself, but rather guest rappers and activities like Jace the Ace, Supa Nova Slom and Brother Haz laying down rhymes. Cosby has been performing some tracks off the album live with the Cosnerati Band, however, such as when performed on The Jay Leno Showon Jan. 11.

If you missed Cosby’s late-night appearances and aren’t a big fan of jazz, you can still enjoy his brand of standup comedy live because he is currently on tour. Grab your Cosby sweater (you know you have one!) and get Bill Cosby tickets from StubHub.com to see him live! Cosby will be stopping in U.S. cities like Fort Myers, FL; Augusta, GA; Brookville, NY; Montclair, NJ; Casper, WY; Charlotte, NC; Glenside, PA; Petoskey, MI; Red Bank, NJ and more through summer!