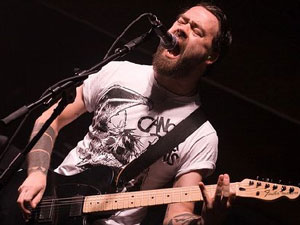 Daniel P Carter probably has the best job in the world; not only does he get to play Heavy Metal on the radio, go to loads of gigs and generally banter about music to people that actually want to listen, he also gets to rock out on stage in his new hardcore outfit Hexes, in support of the much loved Punk rockers The Bronx.

Now I think that’s pretty cool. Their set at KCLSU was sandwiched between hotly tipped Hardcore outfit Black Hole featuring none other than Richard Carter, brother to Gallows’ main man Frank and LA’s answer to the perfect Punk Hardcore fusion The Bronx. Although a fairly short slot with minimal chat, the Southend foursome snarled their way through new tracks from their debut album ‘White Noise/Black Sound’ due for release in 2009 and a few b-sides including Pissholes In The Snow.

Front man Daniel P Carter spits his lyrics over meaty, abrasive guitars playing Punk Rock chord progressions with a few Hardcore breakdowns and the odd keyboard bleep, all of which contribute to a pretty impressive combination of adrenaline fuelled Hardcore, ferocious energy, Metal riffage and the obligatory catchy hooks. Obviously Danny P Carter’s learned a thing or two about a catchy pop song from his earlier days in ‘A’.

Although music wise Hexes were absolutely on top form, their seemed to be some discomfort in the band, some sound issue marred Carter’s mood and friendly chat was obviously not his main priority. It didn’t help either that the three quarter full crowd also had one eye on the band and the other on the three-deep queue at the bar. Hexes definitely need a few more support slots like this before they’ve got a crowd’s full attention and I’m sure it won’t take long. It’s so good to see that UK hardcore is definitely on the up and thanks to bands such as The Gallows, Black Hole and Hexes the anger, passion and raw ugliness of it all has returned to the stage, and we absolutely love it.