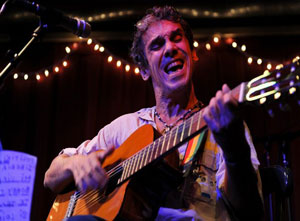 It’s cold enough in London to freeze the smile of a clown’s beaming mug. Luckily, a piece of news warmed our facial cockles this week. Wrap your eyes around this news gem.

Chao also releases a new single La Vida Tombola, on digital download through Because, from Monday 19th January. La Vida Tombola is featured in a documentary about the life of Argentinean football legend Diego Maradona, by Serbian director Emir Kusturica. The film, Maradona by Kusturica, was part of the official selection at Cannes this year and will be released in the UK by Optimum Films in 2009.

The friendship between Manu Chao and Diego Maradona goes back to the day the young Chao saw the equally young Maradona – clad in Boca team strip or maybe the Argentine national colours – dribble a football with his magic left foot. Chao first paid tribute to “El Diego Dios” in 1994 with the song Santa Maradona, from the last Mano Negra album.

It’ll be a gig of epic proportions. We hear it’ll be warm in there too.