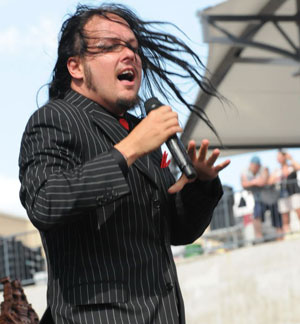 The Union Chapel, Islington, promised that Jonathan Davis’ solo show would be ‘something completely different’ from his recent tour with angst ridden rock band KORN. As gothic hordes swarmed to the restored Victorian church to pay homage to their kilt wearing, nu-metal leader, I concluded that the Union Chapel was wrong – this kind of to-the-death rock worship rarely changes much.

The musical differences between the KORN back catalogue and Davis’ solo project are minimal. While Davis’ backing band included the unexpected edition of a double bass and an electric violin, the songs were essentially the same. He still shrieks and screams his anguished lyrics like a toddler throwing a fit in sweetie shop but, sadly, he doesn’t combine it with the demonic, leaping Scotsman routine anymore. Instead he sits, tiny frame enveloped in an enormous red velvet throne (not entirely unlike like those used for the Beckham nuptials) with one foot tucked neatly under his bottom as he tosses his black mane about his shoulders with practiced abandon. He looked chubby and old, wearing a sensible, pinstripe suit and a highly incongruous pair of Nike Blazers. Pretty disappointing for the man who terrified parents across the country with angst ridden classics like ‘Freak on a Leash’ and ‘Make Me Bad.’

The ever eccentric KORN fan base didn’t disappoint though and secretly they were all I was there to see. Black lipstick was streaked across translucent white skin as the creak of pvc trousers echoed up around the rafters. Vivien and Mickey – two hardcore goth girls dressed entirely in black fishnet – had driven down from Yorkshire to see the show and told me that they were going to cry when Jonathan appeared on stage. I couldn’t see them from my gloomy pew at the back of the church but I have no doubt that they kept their word. Somehow Davis – and KORN – still command endlessly enduring loyalty from their fans. Having sold 30 million albums since the early nineties, it seems unlikely that Davis’ solo project will flop – even if he is now just a freak sitting on a giant armchair without a leash in sight.